Overall, 13 players from Manchester United were selected by their countries for the most recent set of international fixtures, and there’s... 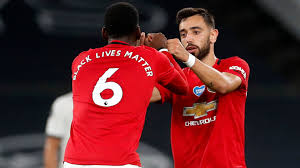 Overall, 13 players from Manchester United were selected by their countries for the most recent set of international fixtures, and there’s much to celebrate in regard to the efforts of our Reds.

From that group, over 26 hours of game time came from 21 appearances, ahead of our return to Premier League action.From success in the UEFA Nations League to qualifying for the Euros, to contesting for World Cup qualification, let’s take a look at the very best performances delivered by United’s players during the November international break.

LEADING THE WAY IN THE NATIONS LEAGUE

Next autumn's Nations League finals will be contested by Belgium, France, Italy and Spain, who earned their places as the winners of their respective groups.

Paul Pogba and Anthony Martial were both called up by Didier Deschamps for the break, as the world champions looked to add to their success in Russia two years ago. In France's decisive group game against Portugal, Pogba shone in midfield alongside Chelsea’s N’Golo Kante, helping Les Bleus to a 1-0 win over the reigning Nations League winners and booking their place in the finals. Pogba’s week wasn’t done there, however, as he also played the full 90 minutes in his side’s 4-2 victory over Sweden. Martial got time to shine in the French attack as well, and was unlucky not to open the scoring against the Portuguese, where he was denied by both the crossbar and a sensational save by Wolves’ Rui Patricio.

David de Gea’s Spain showed the footballing world they too are a force to be reckoned with, as they topped a difficult Nations League group featuring Germany, Switzerland, and Ukraine.

De Gea may be competing with compatriots Unai Simon and Kepa Arrizabalaga to be Luis Enrique’s go-to goalkeeper, but the skill and experience that De Gea brings over the other two is hopefully enough to keep him in contention for La Roja.

We’ve seen the immediate impact Donny Van de Beek has had for the Reds in the Premier League, and the midfielder also added to his goal tally for his country in recent weeks.The Dutchman grabbed the equaliser in a 1-1 friendly against Spain back on 11 November. But despite the Oranje grabbing the win they needed against Poland on Wednesday, it wasn’t enough to qualify: Italy’s 2-0 win over Bosnia and Herzegovina was enough to see them through as group winners. Manager Frank de Boer’s side may not be making it to the Nations League finals once again, but their terrific midfield trio of van de Beek, Liverpool’s Georginio Wijnaldum and Barcelona’s Frenkie de Jong is up there among the continent’s best.

With the Euro 2020 tournament being rescheduled for next summer, we now know that at least one more Red and his country will be vying for international glory.Scott McTominay proved to be vital for Steve Clarke and Scotland in their qualification campaign and last week’s decisive play-off. Deployed at centre-back instead of in his natural defensive midfield role, McTominay helped halt the Serbian attack as the game went to a penalty shootout. With both teams having scored two each, McTominay slotted into the bottom-left corner with an excellently placed penalty to restore Scotland’s lead, before they eventually prevailed to qualify for their first major tournament since the 1998 World Cup.

And while a tough defeat against Israel ended their Nations League promotion aspirations, it’s full steam ahead for McTominay and Scotland as they gear up for next summer’s Euros.

Wales found themselves in control of their own destiny, as they needed simply a point to qualify for League A of the Nations League. With youngsters Daniel James and Dylan Levitt in the squad for the Dragons, it was the former who grabbed the headlines with a stunning goal from distance as Wales cruised to a 3-1 win over Finland at the Cardiff City Stadium.

After last Sunday’s win over the Republic of Ireland and the follow-up victory over Finland, it means there will now be two home nations and, more importantly, two more United players competing in the top tier of the competition.

This international break will go down as one to remember for two of our English players, as both Harry Maguire and Dean Henderson impressed for the Three Lions in their friendly against the Republic of Ireland.

Handed the armband for the first time in his international career, Maguire gave a performance worthy of a captain: he opened the scoring for Gareth Southgate’s side with a well-timed header from Harry Winks’s cross, and became the 33rd different player from Manchester United to score for the English national team. Henderson, meanwhile, made his senior debut for England, coming on at half-time for Burnley’s Nick Pope and helping to consolidate the clean sheet for his country as they ran out 3-0 winners. Maguire was then also excellent in the 4-0 win over Iceland.

Meanwhile, across the Atlantic, South American nations have been competing to qualify for 2022’s World Cup in Qatar, and our eyes have been on the performances of Brazil and Uruguay. Both the Selecao and La Celeste selected some United talent in their recent call-ups, with Alex Telles a part of Tite’s 23-man squad and Edinson Cavani retaining his position as one of Oscar Tabarez’s fearsome attacking options.

For Telles, he came on as a substitute for Atletico Madrid’s Renan Lodi in Brazil’s 1-0 win over Venezuela and helped them close out the game in the dying minutes to secure all three points. With Brazil in a comfortable position at the top of the qualifying group, all eyes are on Telles to deliver some strong performances for United in the wake of Luke Shaw’s injury.

Meanwhile, fellow new signing Cavani opened the scoring in Uruguay’s convincing 3-0 win over Colombia. Though he wasn’t able to find the back of the net during a 2-0 defeat to Brazil, Cavani and his country are still in a comfortable position before the next set of qualifiers take place in March 2021. Having grabbed a goal in United’s most recent Premier League fixture against Everton, momentum is on the 33-year-old’s side as he prepares to return to domestic action.