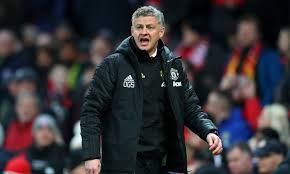 Solskjaer has been United’s permanent manager since early 2019 and after being tasked with guiding the Reds back to their former glory days, the Norwegian manager clearly can’t get enough of the beautiful game.

According to a recent report from The Sun, Solskjaer has applied to Cheshire’s council for permission to build a 5-a-side astro turf pitch in the gardens of his mansion.

The Sun’s report claims that an unnamed source has said: “Ole [Gunnar Solskjaer] lives, breathes and sleeps football but you’d think he’s got enough on his plate trying to turn United around.

“Maybe he wants to put in some extra work at home to improve results on the pitch.”

Solskjaer has come under increasing pressure with the club’s hierarchy reportedly willing to show the Norwegian the door as they line-up former Tottenham Hotspur boss Mauricio Pochettino, according to a report by the The Mirror in its October publication. However, the manager has continued to receive support from the club owners

Whether or not Solskjaer can survive in the Old Trafford dugout long enough to restore United back to their winning ways remains to be seen, but maybe his desire to take his work home with him could add to his hopes.