Man Utd are currently 14th-place in the Premier League table as well as sitting on top of their Champions League group. Manchester United&... 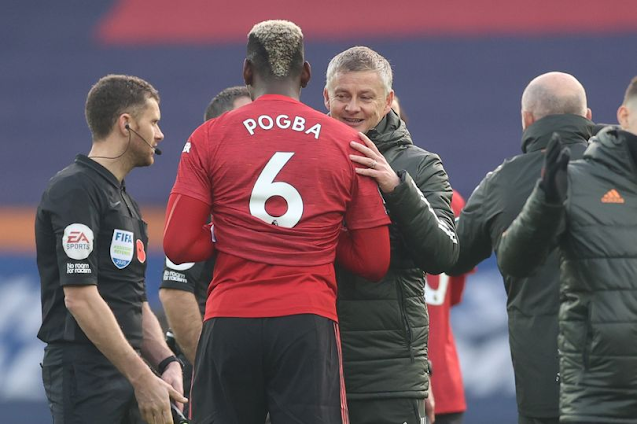 Man Utd are currently 14th-place in the Premier League table as well as sitting on top of their Champions League group.

Manchester United's start to the Premier League season has been widely talked about - as it always is at Old Trafford.

United's home form has been poor, with Ole Gunnar Solskjaer's side yet to win a game at their own stadium in the top-flight so far this term.

However, their form away from home has been fantastic - with Solskjaer's men having a 100% record on the road.

It's been a decent start to life in the Champions League as well after impressive back-to-back victories over Paris Saint-Germain and RB Leipzig.

But last time out, United were beaten in Turkey as they slumped to a 2-1 defeat to Istanbul Basaksehir at the start of the month.

Here is a round-up of everything that has been said on United so far this season from some household names.

(Speaking after the defeat to Arsenal) "There are more problems than solutions.

"You have six midfield players at the club: Nemanja Matic, Fred, Scott McTominay, Bruno Fernandes, Donny van de Beek and Paul Pogba, and you've somehow got to get them into a system, which is forcing Ole to play a diamond.

"I think there was an element today of him thinking he could just put four players in that diamond and it would work after what happened in midweek but McTominay on the right-hand side wasn't working after five minutes.

"You have to be comfortable moving out into that wide area; [Aaron] Wan-Bissaka's already a bit awkward on the ball at right-back so you need someone to balance it and the balance on the right is a real problem for United.

"When [Mason] Greenwood went off it was even worse. They wanted Jadon Sancho obviously to play on that side and it looks like a real bad error in not getting that position recruited."

On missing out on signing Jadon Sancho over the summer: "As fine a player as Sancho is, is he worth £108 million?

"And what impact would such a deal have on the game time of Mason Greenwood, who looks like the best young attacking talent in the country by some distance, scoring 17 goals last season?

"If United think Sancho is worth it, the deal should have been done already. What I cannot understand is if United do not think so, why haven’t they moved on?

"If the deal is not right, regardless of how much it upsets fans, walking away and buying an alternative target can be a sign of strength, not weakness."

On United's Champions League group: "Given the group they're in, I think they'll be happy to get out of the group, being honest.

"Leipzig are going to be a definite threat in this group, PSG are obvious. I think it's a really hard group to get out of.

"Getting through the group stages is fine but I think it's more about the bigger picture, improving as a squad, building as a team, the confidence throughout the squad.

"Finding some sort of identity so that you look at this team, you see it on the teamsheet, you watch it and you know what you're going to get, consistency week in, week out. That's what they'll be striving for."

On United's Champions League hopes: “I think they (United) can be confident, quietly confident.

"But, look, they’re not firing on all cylinders right now and hopefully they can get a couple of players in.

"It’s not ideal, the group that they’ve got, but hopefully they can go into it, get a couple of players, and finish if not first, finish second.”

On Solskjaer: “I never looked at a manager in all my career before the match and I’m talking about some great managers, and some bad managers, going back to when I was eight or nine years of age ... I never looked at a manager and asked if they were going to motivate me today. It comes from within, it comes from your DNA, what you stand for, your background, your family, your team-mates.

"I’m intrigued when I look at warm-ups. Cavani never threw a leg, he actually didn’t do a warm-up, did he? Then he comes on as a sub and is being asked to get them back in the game.

"Ole’s talking having to get him (Cavani) up to speed, well, sometimes it’s up to the player to do something. Ole will pay the ultimate price, obviously.

"Ole will lose his job, walk out of this group of players, that’s what’s going to happen. I’ve been saying it for the last month or two, but you still think, ‘you never know in this game. Things might change’, and you think it’s up to Ole to motivate these players for Arsenal at home.

"People keep saying there’s no support, the stadiums are empty, this is still a great setting if you’re a professional footballer, to play at Old Trafford.”

On standout players in win vs Newcastle United: "From a Manchester United point of view, I think Ole Gunnar Solskjaer deserves credit for changing the team. That team had to be changed after the last performance that they had. They did that and they played very well and they absolutely battered Newcastle I thought.

"They dominated possession. (Juan) Mata and (Bruno) Fernandes were so clever I thought, because they just went and stood in those little pockets in the holes in front of Newcastle's back four and Newcastle couldn't handle that. They were just too good on the ball, they showed a lot of creativity, everything Newcastle didn't have.

"Brilliant ball in for Harry Maguire from Mata for Maguire to get his goal, but those two on the ball, if you give them the amount of time that Newcastle gave them then they are going to punish you and cause you problems all evening as they did.

"Rashford I thought was excellent too, one goal and two assists. Well done Ole Gunnar Solskjaer after that debacle in the last performance."