Ed Woodward has spoken of his optimism about Manchester United’s  “positive path”  under Ole Gunnar Solskjaer and renewed his calls for fans... 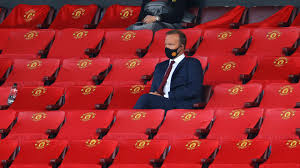 Ed Woodward has spoken of his optimism about Manchester United’s “positive path” under Ole Gunnar Solskjaer and renewed his calls for fans to be allowed back into Old Trafford as soon as possible.
“We miss playing in front of our fans and we are working hard together with our governing bodies and relevant authorities to ensure that fans can safely return as soon as possible.”While the COVID-19 pandemic continued to cause significant disruption, Woodward was “optimistic that the recovery and normalization phase is gradually coming into view“.

He added: “The club’s resilience and our strong commercial business continue to provide a solid foundation and gives us confidence in our long-term outlook beyond the pandemic, both on and off the pitch.

Woodward recognized that not all football clubs were in as robust a financial position and that the Premier League had a “responsibility to support the wider football pyramid”.

“We will continue to push for this support, both through emergency assistance during the pandemic, and through longer-term reforms to ensure that the success of the Premier League is reinforced for the benefit of the national game as a whole,” he said. Woodward also spoke of United’s “steadfast commitment to increasing equality, diversity and inclusion across our club and the game as a whole”.

“To that end, we were pleased to be among the first clubs to sign up to the FA Football Leadership Diversity Code. Football has made good progress in this area but there is much more work to do and Manchester United is determined to be at the forefront of those efforts,” he added.

The club last month committed to diversity targets for its leadership and coaching staff in line with the FA FLDC and this week announced a partnership with Stonewall to promote LGBT+ inclusion.