Premier League clubs are set to come under pressure to allow five substitutions this season and it could be a rule change that helps Man Utd...

Premier League clubs are set to come under pressure to allow five substitutions this season and it could be a rule change that helps Man Utd.

Whatever happens in Ole Gunnar Solskjaer's Manchester United reign from here, he will always have his own little slice of history from his time at Old Trafford.

It was a lovely early summer's evening in late June when Solskjaer etched his name into the record books, becoming the first manager in England to make a quintuple substitution in a competitive game.

The weather and the sight of Scott McTominay, Andreas Pereira, Juan Mata, Daniel James and Odion Ighalo waiting patiently on the Old Trafford touchline to come on gave off an air of pre-season to proceedings, but the previous 80 minutes had been anything but, United beating Sheffield United 3-0 in one of their most accomplished performances of last season.

Solskjaer's moment of history - or infamy as critics of the rule may have it - was made possible by the Premier League following the Bundesliga's example and allowing five substitutions in a game (from nine players on the bench) when football resumed post-lockdown.

With players rushed into action after three months when they'd seen little more than an exercise mat and a medicine ball this was considered a necessary step to look after them, and it can be easy to forget that the players are the most important people in this sport.

Not everyone was in favour of the rule change, but then this is the Premier League, where it can sometimes feel like a vote on whether the sky is blue would still cause arguments amongst the 20 member clubs.

As if to prove the point the league reverted to three substitutes (from seven on the bench) for this season, despite pleadings from the clubs whose European schedules make for a punishing 2020/21.

The Premier League were already out of step with the rest of Europe, with the other major leagues sticking with five replacements. Premier League clubs have already voted against introducing five substitutes this season, but Pep Guardiola and Jurgen Klopp didn't sound like they were willing to let the matter lie before the international break.

Since then Gareth Southgate has added his voice to the sensible faction who can see the benefit to five subs coming back in, during an international break that has again taken its toll on a set of players who are close to breaking point.

As if that wasn't pressure enough on the top flight, the EFL's decision to allow five substitutes from this weekend must surely shame them into action. The argument that this is a rule that would benefit the biggest clubs is a petty one when it's the welfare and health of players that is being discussed.

That also overlooks the fact that with European commitments all of the big six are being forced into two games a week, a run that will stretch into January for all bar Liverpool and Chelsea, who don't have Carabao Cup quarter-finals in the week before Christmas.

Hand those clubs more substitutes to use and we may see greater rotation being introduced, with the comfort blanket of more subs available if the game is going wrong. With three subs one generally tends to be saved for an injury, especially in the current climate, which severely reduces the options available to a manager, in terms of changes from the start and from the bench.

Some of the muscle injuries already sustained this season could have been prevented if five subs had been available. Would Luke Shaw have started all of United's seven games between the October and November international breaks if this rule was in place? Perhaps not. With more subs Solskjaer could have started Brandon Williams in at least one game, with the use of a quintet of subs giving Solskjaer the comfort blanket of knowing he can make a change there if required, as well as having more game-influencing subs up his sleeve.

It could also be good news for United's youngsters, perhaps giving the likes of Teden Mengi and Axel Tuanzebe more opportunities, as well as young right-wing duo Facundo Pellistri and, when he arrives in January, Amad Diallo.

But most importantly the rule change would protect United's players, and that ultimately is what it's about. Marcus Rashford has featured in 25 of 26 games since last season resumed, so it was little surprise to see him pick up an injury at Everton two weeks ago. Solskjaer needs results, so calling on his best players is understandable, but a greater degree of flexibility with substitutes will not only allow more changes, but give him more confidence to refresh his team from the start, knowing he has more options available in reserve, should they be required. 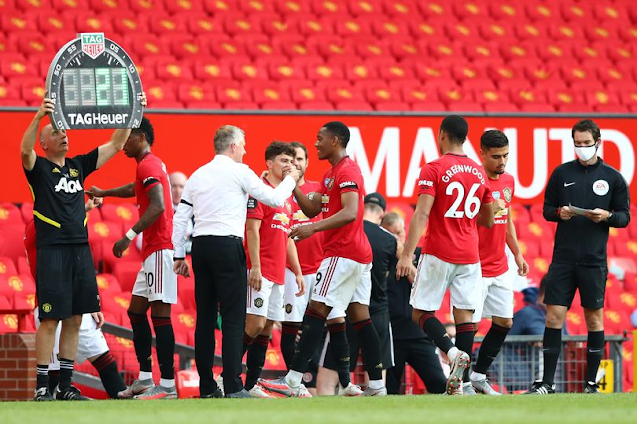