Two homegrown Manchester United talents are focused on the crucial Euro 2020 play-off finals tonight (Thursday), with a prize in the finals ... 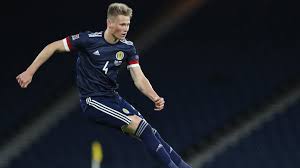 Two homegrown Manchester United talents are focused on the crucial Euro 2020 play-off finals tonight (Thursday), with a prize in the finals at stake.

Scott McTominay is a key figure for Scotland as they travel to Serbia, hoping to qualify for a first major finals since the 1998 World Cup. Meanwhile, Ethan Galbraith has been promoted to Northern Ireland's senior squad as they are at home to Slovakia.

For Scott, the chance to make the nation proud is something that is spurring him on, but he is also clear that the team must not let any additional pressure affect them.

“It’s a big chance for everybody involved, a massive chance,” he told us recently. “I feel like you can be having to overthink how big a match it is, though, and we should act like it’s a normal match – just with a little more riding on it. We’ll keep focused and try to do something special for the whole of Scotland.

“For us, to have the Euros at the end of the season would be amazing.”

The Reds midfielder has been operating as part of a three-man defence for his country and is happy to show his versatility if that is what manager Steve Clarke requires.

“Before, whenever the manager of Scotland asked me if it was a role I was comfortable with, I was like: ‘Of course'. Whatever the manager asks you to do, you do,” he said. “But I could not remember the last time I played there, which I said to him, but it’s a different role I’m enjoying.

“We have a big game coming up and it is important for us to get a big win there as we’ll be off to the Euros.

Meanwhile, Galbraith will hope to be involved as Northern Ireland face Slovakia at Windsor Park, with Ian Baraclough's side on the brink of a splendid achievement.

“Ian gave me a ring and I thought it was a normal call to check up on me,

“ the 19-year-old told The Belfast Telegraph.

“But he told me I was in the squad and it’s unbelievable. It’s my first time to be fully in with the senior squad and to get a taste of it this week is class.

“I went to the Euros [in 2016] and enjoyed it. I also went to the fan zones to see the team do what they did in France, so to be involved in this game is massive for me.”

In addition to those play-off fixtures, there are also international friendlies involving our players.

Daniel James and Dylan Levitt are in the Wales squad for the game against USA, while England face Republic of Ireland at Wembley, with Dean Henderson, Harry Maguire and Marcus Rashford in Gareth Southgate's group.

Eric Bailly's Ivory Coast meet Madagascar in the Africa Cup of Nations but there must be major doubt over the defender's participation due to injury.

Marcus Rashford admitted he was proud to see a wonderful mural of him by local artist Akse pop up in Manchester.

We also took time to remember those who lost their lives in conflict, including those who represented Newton Heath and United.

Our photographers were in place at the Aon Training Complex and we noted Jesse Lingard looked sharp as he continues his return to full fitness.

In the evening, Donny van de Beek scored the equaliser in the Netherlands' 1-1 draw with Spain, although David De Gea sat the friendly out in Amsterdam.

Bruno Fernandes also failed to see any action as Portugal trounced Andorra 7-0 but Paul Pogba and Anthony Martial had some game-time during France's surprise 2-0 loss to Finland in Paris.