Manchester United have discovered our opponents in the knock-out stage of the Papa John's Trophy. The club's youngsters will trave... 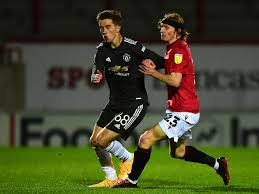 Manchester United have discovered our opponents in the knock-out stage of the Papa John's Trophy.

The club's youngsters will travel to Accrington Stanley in the week beginning 7 December for the one-off fixture in round two, which will be decided on penalties, if required.

Neil Wood's side, Under-21s in this competition, came second in Group B after beating Salford City 6-0, overcoming Rochdale on penalties, following a goalless draw, and losing 4-0 to Morecambe on Wednesday night.

Salford ended up topping the section while only six other Premier League clubs made it to this stage.

Hopefully, the Reds will be able to play in front of fans at some point in the tournament, another real plus point from it.

“When I look back last year, at Doncaster and Rotherham, we had a little bit of a following,” lead coach Neil Wood told us. “We had some of our fans in there. Everyone is desperate to get back to watch football games and it just creates a great atmosphere for our young players, especially seeing the support in the stands for them.

“Hopefully, it happens but I'm not sure it's going to be soon. We definitely look forward to that day.”