Manchester United's Under-18s were presented with a challenge in the Potteries on Saturday morning, as home side Stoke City proved res... 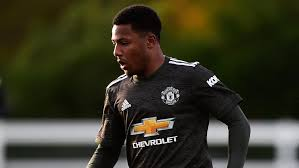 Manchester United's Under-18s were presented with a challenge in the Potteries on Saturday morning, as home side Stoke City proved resilient in defence prior to Dillon Hoogewerf's 88th-minute winner.
The Reds won 4-1 on the club's last visit to Clayton Wood at this level in January 2019, when Mason Greenwood was among the scorers, but although Neil Ryan's side dominated the game again this time around, several first-half chances were either spurned, or denied by Stoke's agile goalkeeper Paul Cooper.The hosts came more into the contest as an attacking force during the second period, and while United continued to have most of the possession, the Potters produced some threatening moments on the break.
In fact, Stoke could have twice taken the lead themselves; the Reds were grateful to goalkeeper Dermot Mee for at least one vital save, while right-back Iestyn Hughes demonstrated his determination with an excellent recovery tackle.Those interventions by the visitors ensured the game remained goalless until the final minutes, giving United the platform to go on and make it three wins from three in November.
Reds centre-back Bjorn Hardley was credited with the assist, a long switch of play that sent his fellow Dutchman clear to find the net. Hoogewerf controlled the ball with a fine first touch before beating Cooper finally with an emphatic finish.