Manchester United Women welcomed Manchester City to Leigh Sports Village for the second time in five days and although, again, the honours... 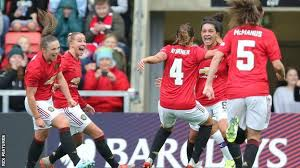 Manchester United Women welcomed Manchester City to Leigh Sports Village for the second time in five days and although, again, the honours were even over 90 minutes, this time the Reds triumphed on penalties in the Continental Cup.

United’s impressive comeback in the 2-2 game against our crosstown rivals last Saturday had been enough to keep the Reds at the top of the Women's Super League. On this occasion, a home victory was needed for Casey Stoney's side to have a chance of progressing in the competition, but the Blues could settle for a draw to win Group C.

Tobin Heath and Lauren James both went close to score the opener before half-time but the teams went to the break all square at 0-0. United kept the pressure up after the interval but couldn’t find a winner and the game went to penalties.

Then, the hosts were the stronger side. Ella Toone, Jackie Groenen, Amy Turner and Hayley Ladd all scored, so when Emily Ramsey denied City's Laura Coombs and former Reds defender Alex Greenwood hit the bar, the Reds were victorious on the night and secured the bonus point.

However, the result means that United are already unable to go through in the Continental Cup this season, even with our postponed fixture with Everton still to play, as winning the group is out of reach. 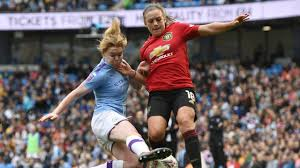 United boss Casey Stoney made five changes from the 11 that started in the WSL derby. Emily Ramsey replaced Mary Earps in net, Lauren James made her first start of the season and Lucy Staniforth made her first start for the club. Katie Zelem and Kirsty Hanson replaced Hayley Ladd and Jess Sigsworth respectively.After an even opening to the game, it was the Reds who got the first few chances. Eight minutes in, Tobin Heath tried the spectacular with a 40-yard strike as she saw Karen Bardsley off her line but the effort went wide.The first big chance of the game came to United shortly after, as a Staniforth pass found James on the left. The latter sent a dangerous cross into the box but an unmarked Heath couldn’t get a touch on the ball.

Minutes later, Heath then returned the favour and found James in the box, who fired a powerful shot towards goal but Bardsley pulled off a strong save to deny the Reds.City’s first big chance came after 30 minutes following a corner but Millie Turner did well to clear as the visitors piled pressure on.Five minutes before the break, United put Bardsley under pressure as City were looking play it out from the back. Reds captain Zelem tackled the ball away from the goalkeeper and Kirsty Hanson, who scored the equaliser last time out, had a great chance to score the opener but Bardsley reacted quickly to save the goal-bound effort.Our neighbours had a goal disallowed just before the half-time whistle. Stanway volleyed home but she had already been ruled offside as the ball hit the net. 0-0 at the break.

United took the initiative after the interval as well, with Stoney’s side getting a big chance to take the lead before five minutes was played in the second half. Bardsley gave the ball away to Heath inside the City box but the American couldn’t quite get control of the ball and a shot from an acute angle only hit the side-netting.Stoney’s side continued to dominate possession and pressed to find an opener. Heath was replaced by her fellow USA international Christen Press on the hour. The substitute was inches away from getting first to ball behind the City defence but Bardsley was quick off her line to intervene.Both teams looked to the bench in order to change things up and break the deadlock. Stoney brought on Ella Toone, Jess Sigsworth and Hayley Ladd, replacing Lucy Staniforth, Lauren James and Katie Zelem, as the game entered the latter stages.

City came more and more into the game as it went on. Twenty minutes from time, substitute Sam Mewis went close to scoring for the visitors as her looping cross hit the bar hit the top of the bar before it went out of play. Jill Scott headed over shortly after before a corner hit the post.Two minutes into injury time, United could have won the game but substitute Sigsworth was denied by Bardsley after a brilliant counter-attack. It ended goalless after 90 minutes with a penalty shoot-out deciding who would get the bonus point, and while that honour was claimed by the Reds, it's the Blues who will march on into the next round.