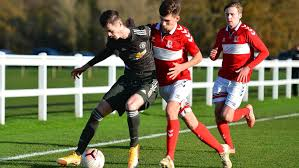 Joe Hugill opened the scoring in only the third minute, in rather scrappy fashion, and it proved to be the only goal of the first half.

Boro competed well and looked to get on top at the start of the second half, only for the Reds to fire a quickfire brace to virtually seal the three points.

Hugill grabbed his second with a low finish under Oliver Swann, at the end of a wonderful team move which included a slick one-two between Iestyn Hughes and Dillon Hoogewerf. Charlie Wellens then added a third following another fine build-up with Zidane Iqbal, Alvaro Fernandez and Alejandro Garnacho helping to tee up the midfielder.

Substitute Charlie McNeill was denied by Swann's diving save, while Hugill was also thwarted by the keeper as he hunted a hat-trick from Fernandez's cross, before a stunning drive by Pharrell Willis pulled one back. United's Johan Guadagno kept out Calum Kavanagh as Boro threatened to make life even more difficult. However, Isak Hansen, another sub, dribbled through from the right to slam in a superb fourth to wrap things up.

Bright sunshine, casting long shadows, provided a cheerful setting as this game commenced at Boro’s tree-lined training centre. Having started the campaign in confident fashion, both teams were aiming to keep the momentum going in what promised to be keenly contested match.

The Reds could reflect on our encouraging opening to the season, with four victories from the opening five fixture, and a further boost to our confidence arrived in just the third minute when Hugill snapped up a loose ball before cracking a left-foot shot past Swan in the Boro goal.

It was a perfect tonic for United against a Boro side that began this game in the league table’s in second place just one point adrift of Manchester City at the top. United were, of course, hoping to build on that lightning start but the game proceeded on a pretty level playing field with chances being made and spurned by both sides.

Boro striker Josh Coburn looked all set, in the 25th minute, to put his side on terms but for a timely and precise intervention from United’s Zidane Iqbal, while winger Willis was another of Boro’s youngsters who could have found the net but was thwarted by centre-back Rhys Bennett.

In between times, Garnacho looked destined to add to the goal he scored against Everton last week after outstripping Boro defender Lucas Reed, but his shot didn’t carry the pace to beat keeper Swann.

The flow of the game during the first half suggested that there could be more of the same in prospect for the second spell, but football can prove to be anything but predictable. And, within the space of two minutes around the hour-mark, United scored twice to put themselves firmly into the driving seat.

Hugill grabbed his and United’s second goal, after taking a pass from Iestyn Hughes, and finishing off a flowing eight man move. Before Boro could recover, United raided again down the opposite flank and another fine move ended with Wellens lashing the ball past Swann.

The destination of the spoils looked assured but there was to be one bump in the road as the match entered its last 10 minutes, when Willis generated a touch of hope for the home side with a well-struck shot.

United weren’t to be denied, however, and, in the first minute of added time, substitute Hansen crowned a great day for the lads in the North East with a brilliant solo goal that even a posse of four Boro defenders couldn’t prevent.