VOTING OPEN FOR NOVEMBER'S PLAYER OF THE MONTH

Three players have been nominated for Manchester United's Player of the Month award for November.   November got off to a tough start wi... 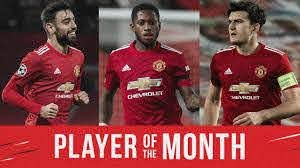 Three players have been nominated for Manchester United's Player of the Month award for November.

November got off to a tough start with a home defeat to Arsenal and an away loss at Istanbul Basaksehir, however the Reds picked up the pace and performed brilliantly in the remaining fixtures of the month.

A convincing 3-1 win at Goodison Park was followed by our first home league win of the season against West Brom. The Reds also were emphatic in beating the Turkish champions 4-1 at Old Trafford, before completing the month with an incredible comeback away at Southampton.

Edinson Cavani got two crucial goals in our win on the south coast, Alex Telles continued to show his threat from dead-ball situations and solid defensive work, while Donny van de Beek has also really found his feet at United and showed what he was all about with his passing, movement and tackling in November.

However, it is the following trio who are up for the award this time around…

Our Portuguese magnifico has been nominated for the third month out of three in 2020/21 and deservedly so after a brilliant few weeks.

He scored twice and conjured an assist against Everton and scored the winner against West Brom. Against Basaksehir, he netted a brace, rifling United into the lead with a wonder strike early on - his 20th goal for the club.

Along with Cavani, Fernandes was instrumental in our comeback against Southampton, scoring United’s first goal and setting up the Uruguayan for the equalising effort.

Key stat: No midfielder at United has reached 20 goals for the club quicker than Bruno Fernandes (35 appearances).

The Brazilian midfielder continued his fine form and was a mainstay in the United team throughout the month, sitting out just once, against Basaksehir in Turkey. His quick passing and tenacity in midfield caused several problems for the opposition. He also showed his strong ability to win the ball back and distribute it to his team mates. Several dominating displays earned him his nomination.

Key stat: No Manchester United player has won more tackles in the Premier League this season than Fred (18).

Captain Harry once again showed what he was all about with a number of solid defensive performances in November. Once again, the defender played all of United’s games during the month and showed his invaluable leadership. His presence in the air and ability to play out of the back was evident as the Reds capped off November in style. His tackle in injury time against Everton set up the counter-attack which resulted in Edinson Cavani's first United goal, too.

Key stat: No Premier League defender has won as many aerial duels as Harry Maguire so far this season. (41).

The Player of the Month poll is now open in our Official App, which is free to download.

Be quick to cast your vote, as the poll is set to close on Wednesday, when the winner will be announced.