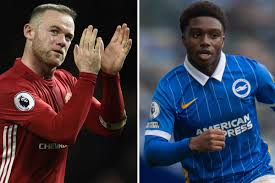 Wayne Rooney has encouraged Manchester United to sign Brighton defender Tariq Lamptey, according to a report in Spain.

Spanish media outlet Mundo Deportivo, as quoted by CaughtOffside, is reporting that the Manchester United legend is impressed with the Brighton full-back.

The same article states that the former Manchester United striker urged his former club to consider a swoop to sign the 20-year-old to bolster their options at full-back.

According to the same story, Manchester United could face competition to sign the England Under-21 international from Spanish side Atletico Madrid.

Mundo Deportivo claim that Atletico boss Diego Simeone is interested in Lamptey despite the pint-sized defender not fitting the bill of a traditional full-back for los Rojiblancos.

The media outlet claim that Brighton have no plans to sell Lamptey given the English defender’s impressive start to his career at the Seagulls.

Lamptey has scored one goal and has made one assist in eight games in the Premier League in the current campaign.

Brighton signed Lamptey in a permanent deal from Chelsea FC on a three-and-a-half year contract in the 2020 January transfer window.

The English full-back, who made just three appearances for Chelsea FC, has scored one goal in 19 games in all competitions for Brighton.

Manchester United will host West Brom in their next Premier League game at Old Trafford on Saturday afternoon, while Brighton will travel to Aston Villa.