WHY DE GEA COULD BE A NOISY NEIGHBOUR!

We all know David De Gea is a cool character - but what is he really in to away from the pitch? Inside United, our official magazine, delved... 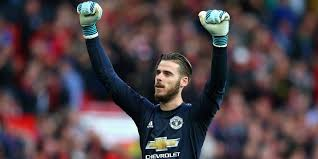 We all know David De Gea is a cool character - but what is he really in to away from the pitch?

Inside United, our official magazine, delved into his love of music in an insightful interview to discover David is learning to play the drums. Maybe his musical tastes are changing too as we've heard in the past about his affection for heavy rock music that doesn't always go down well in the dressing room.

These days, his playlist includes a variety of genres that help him relax away from the pressures of keeping goal for the Reds.

So when did his love affair with rock music start? “Well, I used to go on holiday to Alicante on the Mediterranean coast in Spain, and I was always outside hanging out with my friends. I started hearing some guys that were listening to music, which was Spanish rock and, after that, I started going out looking for that type of music.

“I started getting really into it and, just like now, I was always on the look-out for new bands, but I remember the first band I liked were called Saratoga. And that's how it started.

“I was really into Avenged Sevenfold but now I listen to all type of music. Not just rock. Rock is my favourite but I listen to a little bit of everything, to be honest.”

Therefore, what will you find David listening to, when he is driving in the car or chilling at home?“From old-school Spanish music to Spanish rap and hip-hop,” he explained. “I love Spanish rock and Spanish pop too. Pretty much everything, to be fair.

And a man who has always been so good with his hands is putting them to use on the drums as he makes his own music.

“It's true,” he confirmed. “I play a bit because my girlfriend bought me a drum-kit a few years ago and I started playing, messing about on the drums a bit.

”It's difficult,“ he admitted. ”I think, if you take it up as a kid, it's easier but, when you're a bit older, I pick up the odd rhythm but I enjoy it. It's good fun.“

“I always just stick on my playlist so it varies, there's all sorts of music on there.”