WHY DE GEA IS INSIDE UNITED'S COVER STAR

The latest issue of the official club magazine, Inside United, is out now and David De Gea is the big cover star. The Spanish stopper is in ... 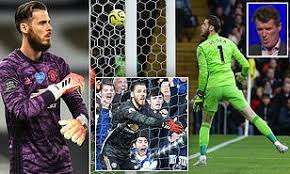 The latest issue of the official club magazine, Inside United, is out now and David De Gea is the big cover star.
The Spanish stopper is in his 10th Reds season, recently passed the 400-game landmark and also turned 30 earlier in the month, so that combination of milestones made David the perfect choice for the front cover and a huge exclusive interview inside.

“I’m still the same person today, but I’m much more mature now,” he says, reflecting on the man who has just turned 30 and the youngster who turned 21 in his early days at United.

“When I arrived I was just a kid so, as you’d imagine, I was unsure of lots of things. I was coming to a massive club, it was a different language, a different culture, everything was different. I’ve matured a great deal as a person for sure, and I’ve grown a lot as a player.”

As we know, it’s turned out to be an epic stay so far for David, rising to become the keeper with the second-most appearances in club history and winning the Player of the Year award a record four times.

“I’m truly grateful for all these years that I’ve been here, and what can I say? It’s been incredible!“

There is lots more from David in the informal but in-depth chat, which you can only read in full in Inside United. Get to know more about the man off the pitch as he talks about music, cuisine, hobbies and a variety of other topics.

Elsewhere in the magazine, Juan Mata talks football philosophy, there are edited highlights of Bruno Fernandes’s brilliant appearance on the UTD Podcast, and there’s a big focus on the upcoming action on the pitch with a Champions League special and a close look at the approaching Manchester derby. It’s not to be missed!