Your reward for surviving 2020: Marcus Rashford cooking school lunches in a dinner suit

Marcus Rashford, one of our best footballers, used 2020 to prove he was also an exceptional campaigner, forcing the government to U-turn w... 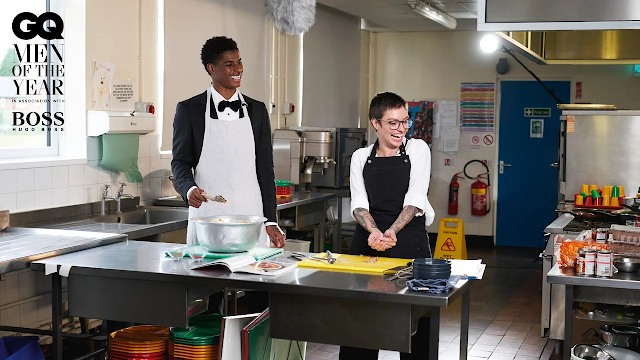 Marcus Rashford, one of our best footballers, used 2020 to prove he was also an exceptional campaigner, forcing the government to U-turn within a day on school meals. We brought him and Jack Monroe together to prep meatballs for his former primary school

We’re big Marcus Rashford fans here at GQ, but who could have expected 2020 to be the year one of the country’s most talented footballers also pivoted into being one of its most effective campaigners? But you know what? We absolutely love to see it.

After our current government tried to scrap free school meal vouchers during the summer holidays, Rashford spoke out: he had relied on them growing up and wanted the government to reconsider. Within 24 hours, the government had U-turned. Since then they’ve tried to scrap them during the Christmas holidays, again aborted in part due to his campaigning: England, Scotland and Wales will also be extending the scheme through the 2021 holidays. Now, Rashford is launching a book club to promote reading, literacy and the power of escapism through the written word. “My biggest aim is to give kids the best chance from the day that they’re born,” he told GQ.

We wanted to celebrate Rashford’s victories this year, and so, on the day he received his GQ Men Of The Year award for Campaigner Of The Year, Rashford headed back to his old primary school to meet campaigner and food writer Jack Monroe, who helped him prepare her meatball dish for the current pupils. Monroe also interviewed him for our Men Of The Year issue and she couldn’t have been a better pick: someone who has spent years campaigning against child poverty and hunger, who has followed his activism keenly and who herself has written cookbooks specifically based on her experiences relying on food banks, helping Brits with little to no money still eat well.

“This has got to be the weirdest place for an awards ceremony,” said Monroe as they debated if they could even shake hands at the moment. “Did you ever imagine you’d be back here in the kitchen?”

“No, because I can’t cook,” replied Rashford.

Monroe’s recipe for meatballs, using baked beans and turkey mince, came from when she was a single mother using food banks to feed her family. Both her and Rashford have a personal stake in making sure the government maintain their responsibility to keeping Britain’s youngest and most vulnerable citizens fed – and neither have been afraid to be open about it. “It’s really admirable coming out and saying, ‘Hey, that was me, I was in that situation.’ What you’re doing is you’re breaking down that stigma,” added Monroe.

“I’ve obviously helped a lot of people, but I know that there’s loads more people that need the help,” added Rashford before receiving his gong in the school canteen. “For me, it’s a problem that shouldn’t exist in this generation.”