ZINEDINE ZIDANE was slammed for his 'suicidal rotations' as Real Madrid suffered their third defeat in three weeks. Los Blancos we... 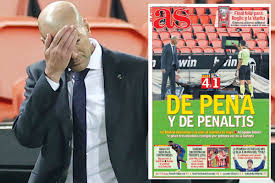 ZINEDINE ZIDANE was slammed for his 'suicidal rotations' as Real Madrid suffered their third defeat in three weeks.

Carlos Soler equalised with a retaken penalty ten minutes before half-time before a bizarre Raphael Varane own goal sent Real in trailing at the break.

A further two spot kicks from Soler in the second half ensured he completed a bonkers hat-trick.

The result followed back-to-back losses at home to Cadiz and Shakhtar Donetsk's second-string side in October as pressure mounts on Zidane, whose side are fourth in LaLiga.

Spanish newspaper AS branded the Frenchman's team selection 'suicidal' as he brought in Marcelo and Isco for Ferland Mendy and Toni Kroos - the pair's first start since the Cadiz game.

Marcelo gave away the second penalty with a clumsy foul while Isco was ineffective in both defence and attack before eventually being substituted after 83 minutes.

Zidane, who did not even turn to his bench until after Valencia's fourth went in, shouldered the blame for the defeat.

The 48-year-old said: "After the goal, we let our guard down a bit and changed what we were doing.

"Everything happened to us, to be fair. It's difficult to understand our game.

"I don't think Valencia were better than us tactically. But I'm the one responsible because I have to find solutions.

"There are no excuses. After the first goal, we dropped our guard. Everything piled up today.

"It's true that we weren't how we were before at the back."

Asked specifically on the decision to start Isco and Marcelo, Zidane added: "They're all Real Madrid players and that's why I chose that XI."