Manchester United need a single point from their last two fixtures in Group H to seal a spot in the UEFA Champions League last 16, but Par... 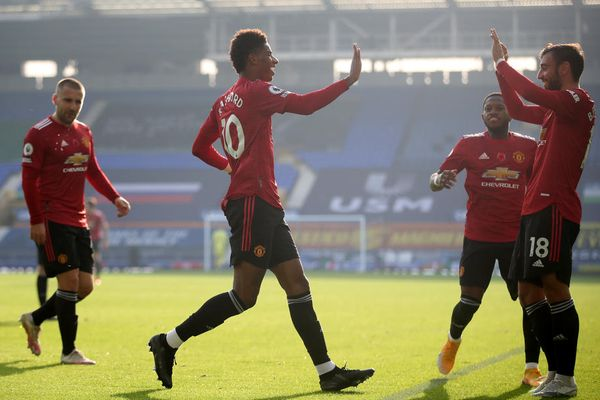 Manchester United need a single point from their last two fixtures in Group H to seal a spot in the UEFA Champions League last 16, but Paris Saint-Germain pose a menacing threat on Matchday 10.

Thomas Tuchel’s side emerged 2-0 winners the last time they visited Old Trafford, and Les Parisiens can draw level at the pool summit if they maintain their perfect record at the Theatre of Dreams. Three teams can in fact end the evening level on nine points apiece in Group H if RB Leipzig also beat Basaksehir, who must win if they’re to have any hope of advancing.

Chelsea are the other English heavyweight returning to the ring Wednesday, and a win at Sevilla will guarantee the Blues finish top of Group E with one game to spare. The two teams are both certain to progress, level on 10 points, and Frank Lampard will have a fully fit squad to call upon:

Borussia Dortmund host Lazio in a similar struggle for all the marbles in Group F. Lucien Favre’s men lead by one point despite losing 3-1 in Rome on the opening day. A win at the Westfalenstadion will wrap up a first-place finish for the Black and Yellows. Club Brugge sit four points off the top two but can revive their qualification bid with victory at home to Zenit St. Petersburg. A win for the Russians will rule either club out of progressing any further.

Barcelona and Juventus already know they’ll qualify from Group G, but the order of finish is still to be solidified, with both clubs lacking in confidence of late. Lionel Messi will be rested for Barca’s visit to Ferencvaros, while Dynamo Kiev travel to Turin hoping they can offer Andrea Pirlo’s Bianconeri more resistance following a 2-0 loss in the reverse tie.

Champions League stakes don’t get much higher at this stage of the tournament than what we’re witnessing in Group H, which hasn’t failed living up to its billing as this season’s ‘Group of Death’. PSG can usurp first place as their own with a good enough win over United, who only require a draw to cement a last-16 spot that looked improbable this time two months ago.

Marcus Rashford’s 87th-minute dagger settled a 2-1 result in United’s favor when these teams met at the Parc des Princes in October, their second victory in as many visits to the ground:

Edinson Cavani could return to Manchester United’s starting XI after coming on to head home a heroic double in their 3-2 comeback at Southampton on Sunday. The Uruguay frontman remains the top scorer at PSG with 200 goals for the club, and Cavani would surely revel in showing his former employers why they were wrong to let him exit this past summer.

There were concerns over the fitness of goalkeeper David de Gea after he clattered into the post trying (and failing) to save a James Ward-Prowse free-kick. Manchester reporter Bill Rice said Ole Gunnar Solskjaer’s No. 1 is fine to play, though deputy stopper Dean Henderson lies ready to step in if the Spaniard experiences any setbacks:

Over in Seville, Premier League peers Chelsea will have a clean bill of health for the first time in a long while as Lampard looks to latch onto top spot for the final games in Group E. United States international Christian Pulisic made his return from injury in Sunday’s 0-0 stalemate against Tottenham Hotspur, while Billy Gilmour could make his first senior appearance of the campaign.

Defeat isn’t something either of these teams is accustomed to this term, with the Blues unbeaten in 14 games and UEFA Europa League titleholders Sevilla having won their past five in a row. Julen Lopetegui’s side have lost once in 19 outings at the Estadio Ramos Sanchez Pizjuan thus far in 2020, but Chelsea look improved since this duo drew 0-0 at Stamford Bridge in October. Lampard’s men have kept clean sheets in eight of their last 10 games in all competitions, evenly split between fixtures at home and away.

Borussia Dortmund could do with a little more of that resilience at the back, evidenced by their 3-1 loss at Lazio, one of three occasions this season that they’ve conceded three goals:

The two teams collide in North Rhine-Westphalia each coming off the back of home defeats, with Lazio losing 3-1 to Udinese and Dortmund downed 2-1 by Cologne.

Erling Haaland scored the only goal for Favre’s side in the reverse fixture, and the Norwegian hopes to avoid recording back-to-back blanks for the first time this season after failing to net over the weekend:

Ronald Koeman told reporters his reasons for resting Messi ahead of the trip to Ferencvaros, having got just reward the last time he omitted the Argentinian. That second-string Blaugrana battered Dynamo 4-0 last week, and the manager’s reserve options will again be entrusted with keeping up a perfect record so far in Group G.

The same can’t be said of Juve after they came off second best to Barca in October. The Serie A titleholders were disappointed to draw 1-1 at promoted Benevento on Saturday—their fifth draw in nine league games this term—but not even that result could ruffle Pirlo’s air of cool:

It would be a mighty upset if Juventus did fail to beat Dynamo, whose only point in Group G came via a 2-2 draw at Ferencvaros. However, Juve will take nothing for granted after a 90th-minute Alvaro Morata winner was required to beat the Hungarian minnows in their last outing.

Morata scored his side’s opener against Benevento before receiving a red card late on, but he’ll hope to reunite with Cristiano Ronaldo against Dynamo if Pirlo elects to field a strong lineup.