Manchester United are looking to qualify from their Champions League group by avoiding defeat against PSG – and their latest training sess... 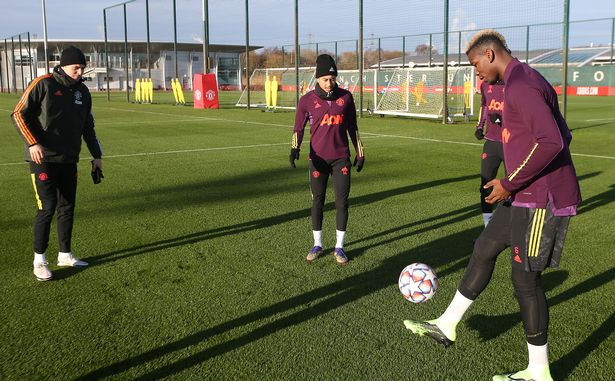 Manchester United can reach the Champions League round-of-16 if they avoid defeat against PSG.

Ole Gunnar Solskjaer’s side have been banishing the demons from the start of the campaign with four consecutive wins in all competitions.

Having lost to Istanbul Basaksehir 2-1 at the start of November, they cruised past the Turkish side 4-1 in the reverse fixture at Old Trafford.

While United have also shown their fighting spirit, turning it around against Southampton to see off the Premier League high-flyers 3-2 with an incredible comeback.

The Frenchman missed out on the trip to St Mary’s after picking up an ankle problem in the international break.

But the club harboured hoped he would be available for PSG, with Solskjaer telling Sky Sports : ““Paul's ankle is improving.

“Hopefully, he's on the grass, training today [Sunday]. If not, hopefully tomorrow [Monday]. I'm not sure if it takes a long time to recover but hopefully he's ready for Wednesday.”

And Pogba was seen getting involved with training as he joined Eric Bailly at Carrington, posing a new threat for PSG.

One player who knows all about United’s European opposition is Cavani, their all-time top scorer with 200 goals in 301 appearances.

He played a pivotal role in the win over Southampton by getting the equaliser and the winner with his head.

And the 33-year-old was seen at Carrington sharing a joke with Jesse Lingard and enjoying an exercise with Marcos Rojo.

Bringing fringe players in from the cold? Looks like Cavani is enjoying a leadership role at United…

The Spaniard has been put under pressure this season, making just three clean sheets from 12 appearances.

And it has seen United’s coaching staff step up his preparations for PSG, despite the French side’s depleted options in attack.

De Gea was seen working on his low approaches to the ball before testing his foot reflexes with a game of football-tennis.

United fans know that their star midfielder delivers in the big moments, showing a winning mentality even after the equaliser was scored against the Saints.

And Fernandes was seen getting in the mood to take on PSG when he posed for two photos at Carrington.

He gave identical poses, with arms folded and a stern look on his face, for snaps with Bailly and Marcus Rashford.

The man with 10 goals and five assists appears to be ready for PSG.

United’s No.9 will be hoping the PSG game can see him find the net for the first time since the Istanbul loss.

Even when he was the club’s top-scorer last season with 23 goals, the Frenchman’s smile is a rare sight.

But it was on show in the latest training session, with Martial beaming as he wore his United tracksuit.

Martial may have been ill over the weekend but he was all smiles as Solskjaer said he would be “available for selection”.