Jack Grealish ‘gets in Manchester United, Tottenham, Chelsea and Man City starting XIs’ and ‘could do a Diogo Jota at Liverpool’ 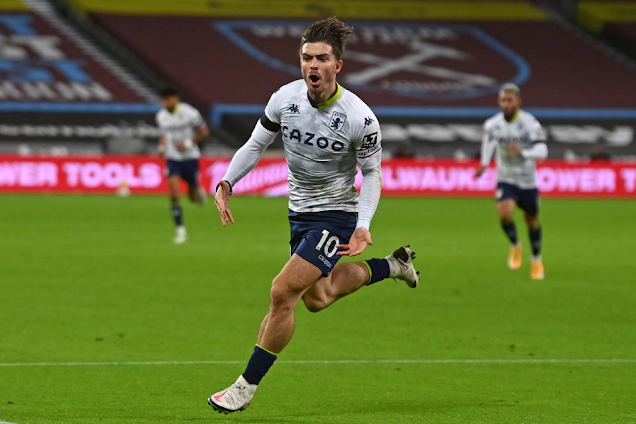 Villa lie 10th in the Premier League after a positive start to the 2020/21 campaign, having won each of their opening four matches – and once again the star of the show has been Grealish.

The 25-year-old has netted five goals and added five assists in nine appearances this term, and he’s well on course to breaking his best goal return in the top-flight.

Remarkably, those stats are better than football superstars Lionel Messi and Cristiano Ronaldo as well as Liverpool forwards Mohamed Salah and Sadio Mane.

And Durham believes it’s only a matter of time before a big club comes calling for the England international.

“I think he gets into any team in the Premier League,” Durham stated on Drivetime. “What I mean by that is: in summer, if you’d said Liverpool were going to sign Diogo Jota, nobody would have said he would have the impact he’s having.

“I think Grealish could do a Jota at Liverpool. I think he gets in at Chelsea, he definitely gets in at Tottenham and Manchester United.

“Manchester City probably wouldn’t sign him, but they do seem to get linked with him; I think he gets into their team as well.

“They’ve got an abundance of riches but Raheem Sterling doing what he’s doing across that front line can play in any position. Jack Grealish can play in different positions.

“I think he’s that good. £100million pounds and he improves any team dramatically.”

Earlier this week, lifelong Arsenal fan Piers Morgan took to social media to suggest his beloved side should offer Villa £100m for Grealish, or instead a £50m bid plus Mesut Ozil, Shkodran Mustafi and Granit Xhaka in a swap deal.

However, speaking on Wednesday’s talkSPORT Breakfast, former Villa striker Gabby Agbonlahor laughed off Morgan’s suggestion and said his public plea would have only made matters worse for the north London side.

“I think first of all Piers Morgan saying that is going to put off Jack off [going to Arsenal] anyway, as during the lockdown he hammered him in the media, so Piers Morgan isn’t helping them get him anyway,” he said.

“Look where Arsenal are… I’m sure if he ever wants to leave Aston Villa he’ll be looking at a lot better teams than Arsenal.

“This season Aston Villa have tied him down, and will there be bids in the summer? I’m sure there will be.

“But Aston Villa have rich owners who don’t really need the money from a sale of Jack Grealish.

“At the moment would they want to sell their best player, who for me all their goals and assists are coming from? I just don’t see it happening.”