Fernandes has quickly installed himself as one of United's key men at the club, displaying real leadership qualities which Ferdinand fee... 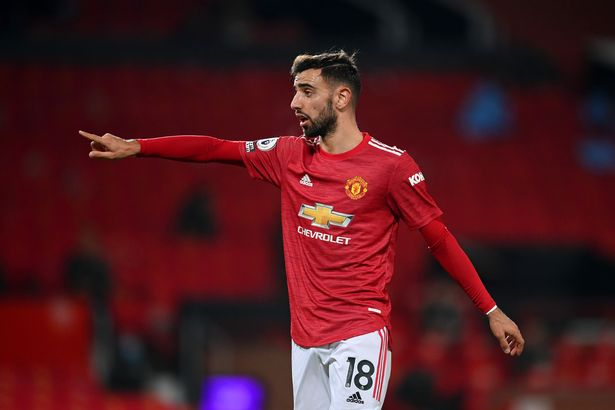 Fernandes has quickly installed himself as one of United's key men at the club, displaying real leadership qualities which Ferdinand feels his old club are severely lacking in

Bruno Fernandes has backed up Rio Ferdinand's claim by insisting Man Utd need "25 leaders" if they are to win any silverware.

Former United defender Ferdinand claimed his old club were "suffering" from a lack of leaders and there weren't enough players with the type of character Fernandes has shown since his arrival - echoing a view shared by Roy Keane.

Question marks have been raised over Harry Maguire's suitability as United captain, with growing calls for Fernandes to be handed the role full-time.

But Fernandes feels it is down to each member of the United squad to support Maguire.

“Everyone has their own way to lead the team," Fernandes told BT Sport. "I think everyone has leadership inside them, but in different ways.

"Maybe my way of showing leadership is a little more expressive and people see more from me than other players but I think at the end of the day, you have to have 25 leaders in the team if you want to win something."

And that is clearly Fernandes's aim, after the midfielder admitted he was "not happy" at not having already secured a trophy in his brief spell at Old Trafford.

Asked about his time so far at United, he replied: "I’ve enjoyed it a lot. I enjoy [being at] one of the biggest clubs in the world.

"It was a dream come true to come to the Premier League, to come to a club I have always dreamed of playing for.

“Unfortunately, we went out in two semi-finals but we achieved third place in the league. The only thing I’ve missed in this year is the trophies.

"I don’t have trophies for the club and I’m not happy about that. I hope 2021 can be better in that way."

Despite a shaky start, the glass is suddenly half full at United as they chase down league leaders Liverpool after securing a spot in the League Cup semi-finals.

Fernandes added: "I think everything can be realistic if we believe. You make your own reality.

"I think the most important thing is that you have a target and you have to hit it. My target is winning trophies.

"It doesn’t matter which kind of trophy it is, I want to win all of them."