Fernandes celebrates after Rashford's third Bruno Fernandes is among several world-class players at Man Utd whose moments of brillianc...

Bruno Fernandes is among several world-class players at Man Utd whose moments of brilliance can rescue United's inconsistent performances.

First things first, let's start with a disclaimer: Nothing about Manchester United in 2020/21 makes the slightest bit of sense, which is certainly an issue when it comes to writing several hundred words about yet another balmy, nonsensical 90 minutes in their season. Do stick with us, though.

At the end of the first Saturday in December United are two points off the top of the Premier League, on the brink of escaping a daunting Champions League group and into the quarter-finals of the Carabao Cup. They're having a great season, right?

Saturday's 3-1 win at West Ham was probably United's season in microcosm. Some wretched moments, a terrible 45 minutes, but somehow enough individual quality to get over the line and claim all three points.

The question for United and Solskjaer is whether this is sustainable. A team playing poorly and winning is usually a good sign, but United are at a stage of their development where consistently good performances would be more encouraging. Some of their victories this season seem to be down to brief flashes of brilliance rather than a clearly-defined long-term plan.

Certainly conceding the first goal and coming back to win isn't sustainable. That's been the case for five successive away games now, but sooner or later your luck will run out. If United play as badly as they did in the first half at the London Stadium at Anfield, the Etihad, Stamford Bridge or the Tottenham Hotspur Stadium then it won't be salvageable after the break.

United's fortune on Saturday was that West Ham didn't capitalise on the countless chances they had, leaving the door ajar for the visitors. All it took was a blistering 15-minute spell to turn the game around. That's the good news for United, that in players such as Paul Pogba, Bruno Fernandes and Marcus Rashford they have individuals who are at the very highest level and don't need a second invitation to bend the game to their will.

Solskjaer didn't hide from the fact that his side had areas they had to improve after the game, either. In particular, he mentioned the sloppiness in the first half, basic touches and passes that weren't good enough. This week marks the seven-year anniversary of the infamous tweet that doomed David Moyes' Old Trafford reign, summing up his press conference as “David Moyes says #mufc must improve in a number of areas, including passing, creating chances and defending.”

This wasn't quite at that level from Solskjaer, but some of it is as basic as that. Certainly first-half they looked like a side not entirely sure of the plan. Rashford made it sound simple after the game, saying the players knew what was going wrong, that they weren't getting in behind often enough. He certainly helped to solve it after the break, but a team with designs of winning major trophies shouldn't be coming in at half-time realising they aren't in the game due to such fundamentally simple issues.

On Friday Solskjaer insisted his team were finding consistency and in a way it's hard to argue. They've certainly been consistent in away results this season and since the end of the January transfer window only Liverpool have claimed more points in the Premier League.

"It depends on how many games you want to go back. Football is a game with human beings and games live their own lives," said Solskjaer. "We've played some fantastic games. Go back 40 games and we're one of the most consistent in the Premier League.

"We're getting less bad performances and getting more consistent. You can never control the result in the end, that's decided by margins."

But United are still inconsistent within a single 90 minutes. Right now they're getting away with it, but it's probably not a long-term strategy.

The first-half in the capital was as bad as it gets. Had they been behind by three or four goals United could have had few complaints. Instead, they ended the day dreaming of a title challenge. Who knows where United will go from here, but while results should, mostly, be pleasing Solskjaer, he should be concerned about some of the performances he's seeing. 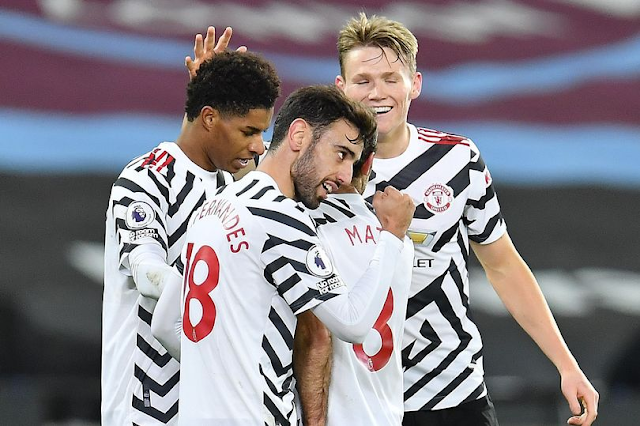