Pogba helped the Reds stage a brilliant comeback against the Hammers on Saturday at the London Stadium Paul Pogba was one of the stars of ... 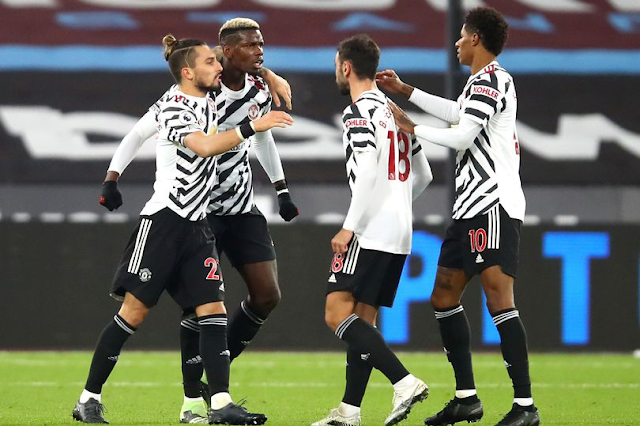 Paul Pogba was one of the stars of the show for Manchester United in the capital on Saturday as he inspired his side to victory.

Despite trailing West Ham United 1-0 at half time at the London Stadium in the Premier League encounter, the Reds hit back with three second-half goals to run out comfortable 3-1 winners.

Pogba was instrumental in the win and started the comeback with a superb finish from outside the box on 65 minutes.

Further goals by Mason Greenwood and Marcus Rashford in the following 13 minutes wrapped up the three points for United who moved up to fourth place in the league table with the win.

It was a welcome boost for Ole Gunnar Solskjaer who had come under severe criticism following United's loss to Paris Saint-Germain during the week in the Champions League.

But he would have been delighted with his side's character and resilience as they saw off the in-form Hammers.

Pogba celebrated the win by posting a picture on his Instagram account of him scoring with the caption "Way to comeback, boys!"

It showed the appreciation and love he has for his teammates for their second-half fightback. One of them couldn't resist commenting on the post either with Portuguese star Manuel Fernandes, who set up Pogba's goal, replying to the post saying: "Pogboooooom" followed by a bomb emoji.

Fans will surely love the interaction between the two midfielders who have shown on their day they are among the best players in the world.

No doubt Fernandes said what every United fan was thinking when Pogba unleashed his strike at goal for the opener. Not many goalkeepers are going to stop those...