BRUNO FERNANDES: A UNITED HERO IN THE MAKING

Bruno Fernandes has made quite the splash (or cannonball) in English football since signing for Manchester United from Sporting Lisbon at ...

Bruno Fernandes has made quite the splash (or cannonball) in English football since signing for Manchester United from Sporting Lisbon at the end of January. Where would Manchester United or manager Ole Gunnar Solskjær be right now had it not been for the mercurial talents of the Portuguese?

Manchester United were in fifth place the day before Bruno Fernandes made his Premier League debut, six points off Chelsea in fourth place. The Red Devils had won nine, drawn seven and lost eight of their 24 games and, by the end of January, they were closer to the relegation zone in terms of points (11) than to Leicester City in third (14).

However, from the point when Fernandes made his Premier League debut until the end of the season, Manchester United won more points than any other side in the competition (32), going unbeaten in their 14 matches in this period (P14 W9 D5 L0). Fernandes led the Premier League for total goal involvements, scoring eight and assisting a further seven goals, while only Kevin De Bruyne (83) had a hand in more shots than United’s new star man (74 – attempting 44 and creating 30). 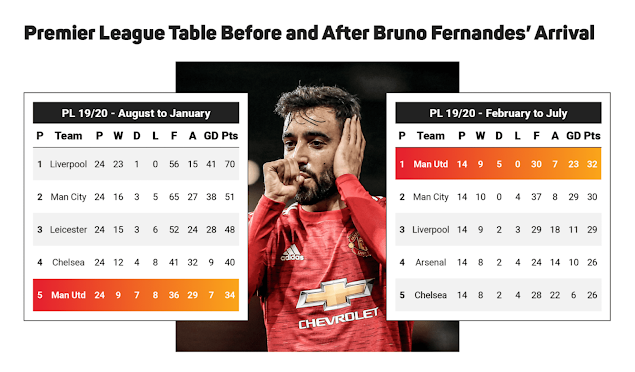 Such were his talismanic efforts on the pitch, Fernandes was crowned Man Utd’s Sir Matt Busby Player of the Year, becoming the second Portuguese player to win the award after the legendary Cristiano Ronaldo. Since its inception in 1987/88, no player has won the award having played as few games in a season as Fernandes’ 22 in all competitions in 2019/20.

Fernandes wouldn’t taste defeat in a Manchester United shirt until his 18th competitive appearance for the club (vs. Chelsea in the FA Cup) – the longest unbeaten start to a United player’s career since Javier Hernandez in November 2010, who also lost in his 18th game (also a cup match vs. a London side, West Ham).

Since Bruno Fernandes’ Premier League debut in February, the Red Devils have averaged more Premier League points-per-game than any other side (2.09). In fact, Man Utd’s 48 points in their 23 league games since his arrival is 17 more than they earned in the same number of games before his debut (31). 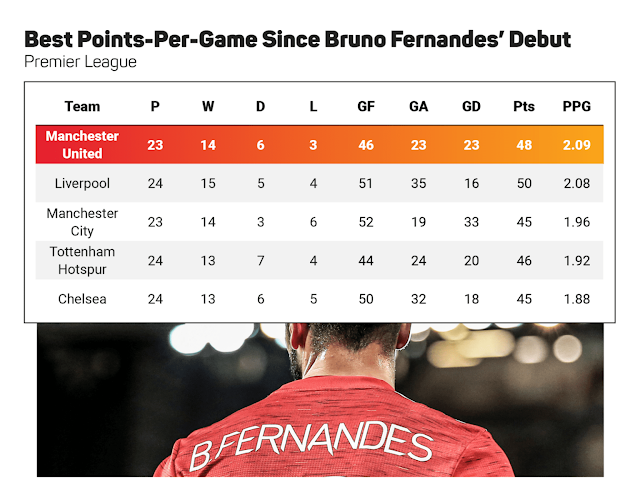 His arrival at Old Trafford has unquestionably reinvigorated the team, complementing the likes of Marcus Rashford, Anthony Martial and Mason Greenwood. Bruno Fernandes has been directly involved in more goals in all competitions than any other player in the Premier League since the start of February (35 – 22 goals, 13 assists) – it’s simply world-class output. 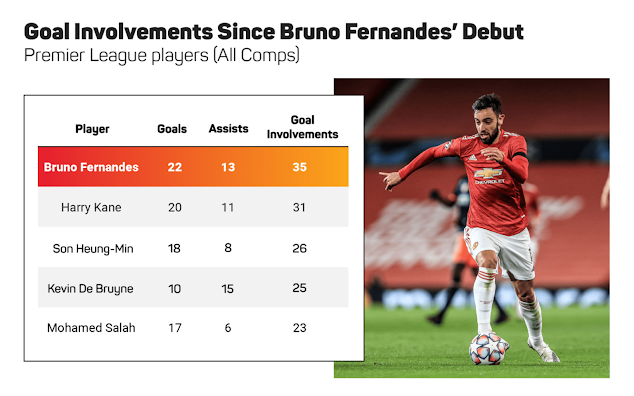 Fernandes has shown he has been able to shoulder the weighty expectations of the club and consistently deliver, leading the way for Manchester United when on the attack. Since February, he has scored more goals (22), provided more assists (13), attempted more shots (126), and created more chances (98) than any other Manchester United player. It will be interesting to see how he fares when fans can attend games in full but for now, he has given the United fanbase plenty of moments to cheer about from afar. 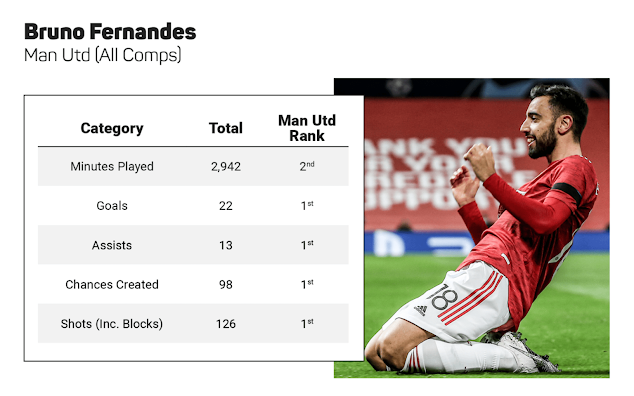 One area that cannot be forgotten is Manchester United’s tendency to win penalties in 2020. Since February, they have been awarded 17 in all competitions, which is more than any other side in Europe’s top five leagues. Fernandes has been responsible for scoring 12 times from 13 efforts from the spot in a United shirt, which is also the highest across Europe’s top five leagues in this period. 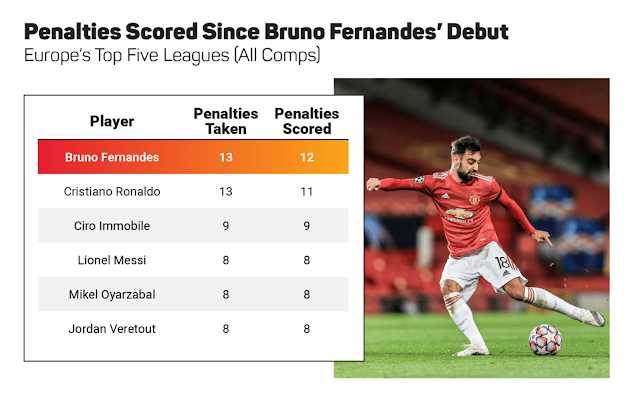 However, the Portuguese is far more than just a penalty merchant. Since his debut in the Premier League, only Kevin De Bruyne (7) and Jack Grealish (5.4) have produced a higher expected assists total than Fernandes (5), with his total of 10 assists also the joint-most with De Bruyne. 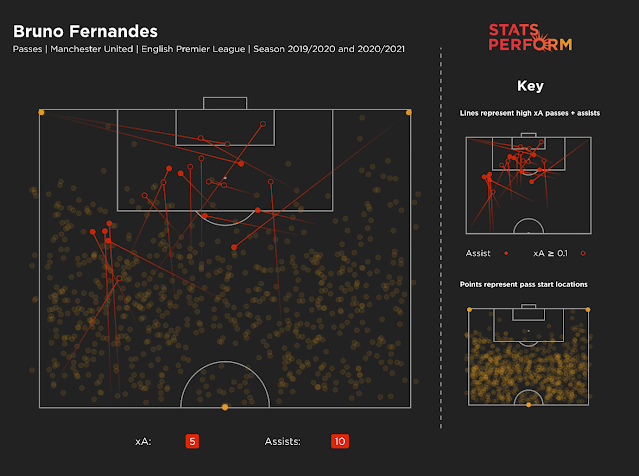 His ability to create so frequently coupled with his goalscoring exploits from midfield has been astonishing. No player in Premier League history has registered more goal involvements in their first 23 appearances in the competition than Fernandes (25), who shares that mantle with two strikers in Andrew Cole and Kevin Phillips. 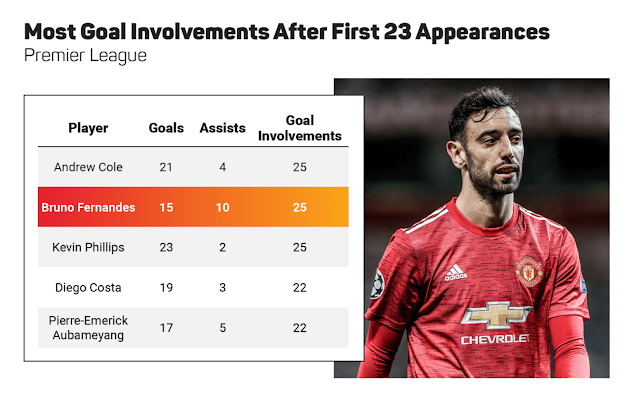 When revisiting the advanced metrics, Fernandes has been directly involved in more open-play sequences that ended in a goal in the Premier League than any other player since his debut (24), which further cements the notion he is the fulcrum in the Manchester United side when in possession of the ball. 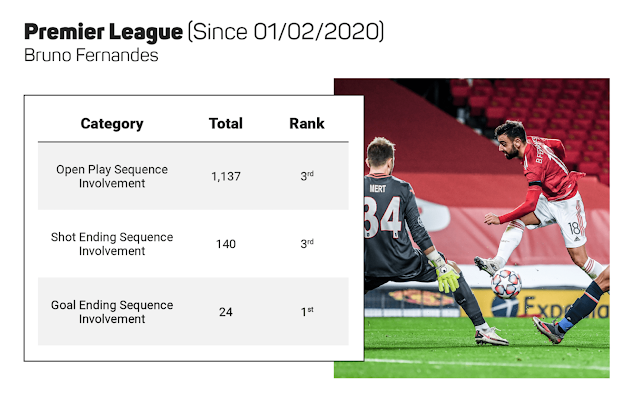 Fernandes’ sustained attacking threat is further demonstrated in the graphic below which shows his contribution compared to the rest of the league (min. 500 minutes played). He has been directly involved in more than one goal per 90 minutes since his debut.

Heading into this weekend’s fixture away at West Ham, Manchester United are currently enjoying an eight-match winning run on the road, the longest such streak in their league history, while Bruno Fernandes himself has scored in each of his last five Premier League away games (six goals). Should he find the net this weekend, he will be the first player to score in six consecutive away league appearances for the Red Devils since Denis Law in March 1964.

Bruno Fernandes has scored 22 goals in his 37 appearances in all competitions for Manchester United; only Ruud van Nistelrooy (30), Zlatan Ibrahimovic (24) and Robin van Persie (23) had scored more goals at this stage of their Red Devils career in the 21st century. If Fernandes continues down his current path, more records will tumble and he’ll quickly establish himself as a modern-day hero at Old Trafford, something they’ve needed in order to help re-establish themselves at the upper echelon of English football.