Ole Gunnar Solskjaer has told Paul Pogba’s controversial agent Mino Raiola he must understand that football is about teams rather than ind... 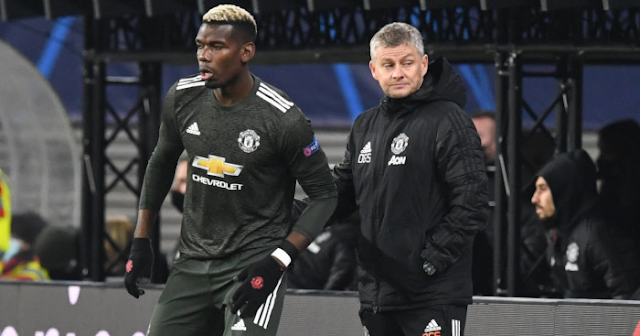 Ole Gunnar Solskjaer has told Paul Pogba’s controversial agent Mino Raiola he must understand that football is about teams rather than individuals following his disruptive comments on the eve of Manchester United’s Champions League exit.

The 27-year-old capped an impressive display with a goal in Saturday’s 3-1 win at West Ham. After the game, Pogba spoke about the need to stay focused on the crunch RB Leipzig clash and derby against Manchester City.

It was exactly the sort of professionalism United would expect from their record signing.

But the build-up to Tuesday’s key Group H encounter in Germany was dominated once again by Pogba’s Old Trafford future. That’s after Raiola claimed his unhappy client would not sign a new deal and wanted to leave.

The France international came off the bench against Leipzig and almost inspired a comeback. Sadly for United, it was too little, too late. The   3-2 defeat means United will be playing Europa League football whether the midfielder is there or not.

Solskjaer was left to reflect on where it all went wrong for United after they finished third in their group with nine points.

But of course the question of Raiola’s comments also came up, prompting a professional response from Solskjaer.

“You have to ask Paul if he’s happy or unhappy,” Solskjaer told BT Sport

“I’m not going to speak for him. He is focused on doing his best for the team when he’s here.

“He is working hard in training and he just needs to focus on his performances.

“Now is not the time to discuss transfer targets and ins and outs.”

Pogba’s leap and header forced United’s second late on at Leipzig, where his stoppage-time cross was almost turned into his own goal by Nordi Mukiele.

But ultimately Solskjaer’s side had left themselves with a mountain to climb after a poor start in which they did not appear fully focused.

The squad is fine,” the United boss told the press conference when asked about the impact of Raiola’s comment. “They’re a team and they stick together.

“As soon as Paul’s agent realises this is a team sport and we work together, the better.

“That’s probably maybe the last thing I’ll say about that. I don’t want to spend energy on that.”

Asked if he spoken to Pogba about Raiola’s latest comments, Solskjaer said: “You know, what we speak about in the background is something else. As I said, I’m not going to talk about Paul’s agent anymore.”