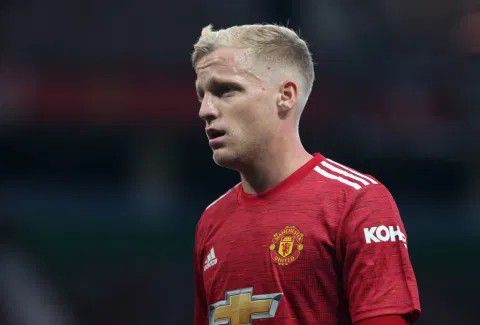 Donny van de Beek made a mistake in joining Man Utd, reckons Louis van Gaal Donny van de Beek has had a slow start to his career at Manchester United (Picture: Getty Images) Share this article via facebookShare this article via twitter 91 SHARES Metro Sport Reporter Sunday 13 Dec 2020 4:24 pm Former Manchester United manager Louis van Gaal says Donny van de Beek made the wrong choice to join the club and has questioned why United signed his fellow Dutchman. The 23-year-old has struggled to make an impact at Old Trafford after his summer move from Ajax, making just two Premier League starts so far. He came off the bench and scored on his Premier League debut, which raised excitement among United fans over their new arrival, but he has had precious few memorable moments since then. Van de Beek was on the bench again on Saturday as the Red Devils played out a goalless draw with Manchester City and he wasn’t even called upon to appear at all.

Star names including Bruno Fernandes and Paul Pogba have been picked ahead of him, while the likes of Fred, Scott McTominay and Nemanja Matic have all played more regularly than him as well. Van Gaal believes Van de Beek will be regretting his decision to move to Manchester and this problem was obviously going to happen, even before the deal went through. ‘I hope his time will come, but I don’t think he made a good choice,’ Van Gaal told Dutch TV channel Ziggo. ‘I said that right away.

‘If you have Paul Pogba and Bruno Fernandes, what position should Van de Beek be in?

‘He doesn’t have the qualities of Pogba and Fernandes. And now you see that Pogba often doesn’t start. Where should Van de Beek play then? ‘I think you could have seen that beforehand. There are so many teams, which could have done better justice to him, also in the top division. He is a boy with many qualities.’ One of Van de Beek’s two Premier League starts saw him substituted at half-time against West Ham, when Gary Neville admitted he felt bad for him, despite an ‘awful’ performance. ‘I feel a bit sorry for Van der Beek,’ said the former United defender. ‘He’s the one who has been sacrificed out of midfield but it could have been any of them, all three of them in the first half were awful.’