Manchester United striker Edinson Cavani is facing a potential ban after a controversial Instagram post, and Ole Gunnar Solskjaer says the U... 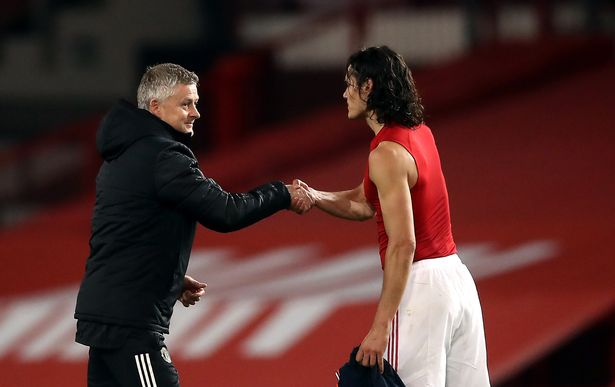 Ole Gunnar Solskjaer says Edinson Cavani has "learned the hard way" as he waits to discover if the FA will charge him over a controversial Instagram post.

After a follower congratulated Cavani on his two-goal match-winning display in Manchester United's 3-2 win at Couthampton, he replied with the message "Gracias negrito", which translated means "thanks black [person]".

Although the term is used commonly in South America, it is unacceptable here, and Cavani deleted the comment when he told of the offence it had caused.

Cavani issued a full apology yesterday, but boss Solskjaer hinted United are expecting the FA to charge the forward and said the club will cooperate fully because they are determined to tackle racism, even if it means losing the veteran striker to a suspension.

"We've communicated with Edinson and he's really deeply sorry for the mistake he's made," said Solskjaer.

"There was no malicious intent at all, it was just an affectionate greeting to a friend of his, but we explained it to him, the FA have asked for his comments and he'll cooperate fully with them, and we'll support him.

"It's an unfortunate situation where he's just come from Uruguay, he's used it in a different way to what we have, but we'll support him and we support the FA.

"It's important the FA have asked him to explain and we want be in the fight against discrimination with everyone.

"I saw that Gary [Neville] said something about all players coming from different cultures should be educated and Edinson has learned the hard way."

United host Paris St Germain tomorrow, needing a point to qualify for the last 16 of the Champions League. David de Gea, who came off injured at the weekend, is fit, while Cavani is also available.