Manchester United again made life difficult for themselves before Paul Pogba, Mason Greenwood and Marcus Rashford saw off West Ham.

Having won 3-2 from two goals down at Southampton last weekend and also conceding first in a 3-1 win over Everton at Goodison Park, Ole Gunnar Solskjaer's men were abject during the first half.

Tomas Soucek's 38th-minute opener was the least West Ham deserved and glorious chances were spurned by Sebastien Haller and Jarrod Bowen either side of half-time, when Solskjaer slung on Bruno Fernandes and Marcus Rashford in place of Donny van de Beek and Edinson Cavani.

Fernandes laid on the hitherto ineffective Pogba for a sumptuous 25-yard equaliser before exquisite finishes from Greenwood and Rashford put away a deflated West Ham.

Bowen was a constant threat during early stages and skipped past Scott McTominay and Alex Telles before crossing for Pablo Fornals to head into the side netting in the 32nd minute.

Fornals then prodded against the post and the pressure soon told - Soucek left unmarked to convert Declan Rice's flick on from Aaron Creswell's corner.

Haller inexplicably lost his footing with the chance to double West Ham's lead and a stunning recovery tackle from Aaron Wan-Bissaka on Bowen helped Solskjaer's men escape to the dressing rooms with minimal damage.

Bowen should have claimed the goal his endeavours merited in the 52nd minute but failed to slide in Vladimir Coufal's cross at the back post.

McTominay's shot into the side netting shortly afterwards demonstrated how West Ham might pay for their wastefulness and Pogba's sublime 65th-minute strike levelled matters - goalkeeper Dean Henderson having found Fernandes with a raking ball that Hammers boss David Moyes felt curled out of play.

The turnaround was complete three minutes later as Greenwood brilliantly flicked Telles' cross onto his left foot for an emphatic finish.

Rashford should have put the result beyond doubt when Fernandes slid him through but the England forward scuffed his strike against the base of the left post.

He made no such in the 78th minute, chipping past Lukasz Fabianski after Juan Mata, on for the injured Anthony Martial, unlocked the hosts.

What does it mean? Solskjaer's kings of the road take the scenic route

Much has been made of United's problematic form at Old Trafford this season, but away from home they are simply scintillating. This game made them only the second side in Premier League history after Leeds United in 2001 to score two or more goals in nine consecutive away games.

All nine of those matches have been won in what was already a club-record streak in league football before this latest win.

They are two points off the top of the Premier League and a point away from the Champions League knockout rounds, although RB Leipzig and Manchester City could offer a sterner test of the obvious vulnerabilities that remain over the coming week.

Ideally, Solskjaer would have given his star duo a weekend off but a desperate first half forced Fernandes and Rashford into action. If they were weary, it did not show. With 22 goals and 14 assists, Fernandes has been involved in 36 goals in 38 games for United since his debut - five more than any other Premier League player in this period.

The Portugal playmaker made a remarkable eight key passes in his 45 minutes on the field, often in search of Rashford's probing runs. The England forward racked up an incredible 12 sprints, more than anyone else on the pitch despite his limited time on the pitch.

Once upon a time, football bloopers compilations were a staple of Christmas stockings. Haller's first-half aberration would have fitted comfortably within an assortment of all-time gaffes. United were on the ropes when he rounded Henderson, only to lose his footing. Haller did not manage a shot on target then or at any point in the match.

- All three United subs were directly involved in a goal (Rashford, Fernandes and Mata), just the second time this has happened for the Red Devils in a Premier League game (August 2017 v Leicester City - Rashford, Jesse Lingard and Marouane Fellaini).
- Greenwood has scored 20 goals in all competitions since the start of last season, twice as many as any other teenager playing for a Premier League side (Gabriel Martinelli, 10).
- United have won their first five away games in a league campaign for the first time since 1985-86.
- They have now won more points from losing positions than any other team in Premier League history (385).
-  In 2020, West Ham have dropped more points from winning positions than any other team in the Premier League (19), while United have won the most points from losing positions (22) in this period.

United face a crunch Champions League trip to Leipzig in midweek before hosting City in the Manchester derby. West Ham are away at Leeds United on Friday. 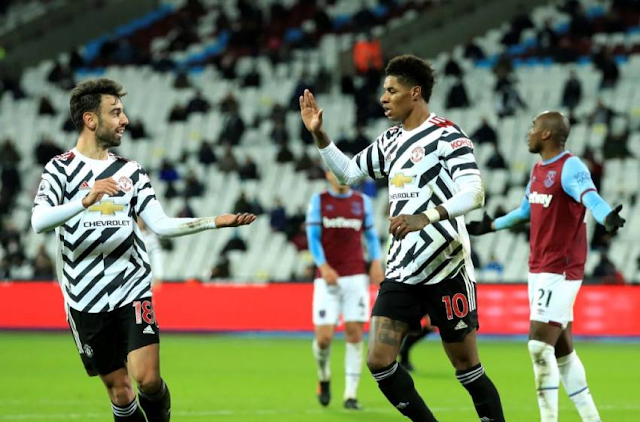