Manchester United face a testing tie in the last 32 of the Europa League after being drawn against La Liga leaders Real Sociedad, while Arsenal must get past Benfica and Tottenham were drawn against Austrian side Wolfsberger.

Ole Gunnar Solskjær’s team were eliminated from the Champions League last week and their reward is a showdown with the side who lead Atlético Madrid on goal difference but have played two more matches. It will be United’s first meeting with the Basque club since the 2013/14 Champions League group stage, when David Moyes’s side beat them 1-0 at Old Trafford due to an Iñigo Martínez own goal and drew the away match 0-0, Robin van Persie missing a penalty. Moyes went on to spend a year as Sociedad manager before leaving in November 2015.

As seeds United will play the second leg at home, with the first staged the week before at the Anoeta Stadium on 18 February. Sociedad, managed by Imanol Alguacil, have lost only once in La Liga this term. United won the Europa League competition under José Mourinho in May 2017 and reached last season’s semi-finals.

Meanwhile, Arsenal have been drawn against Benfica for the first time since the 1991/1992 Champions League, when they were eliminated after extra-time in the second round tie. Spurs face another Austrian side having got past LASK in the group stages, while Leicester play Slavia Prague and Rangers will meet Royal Antwerp. 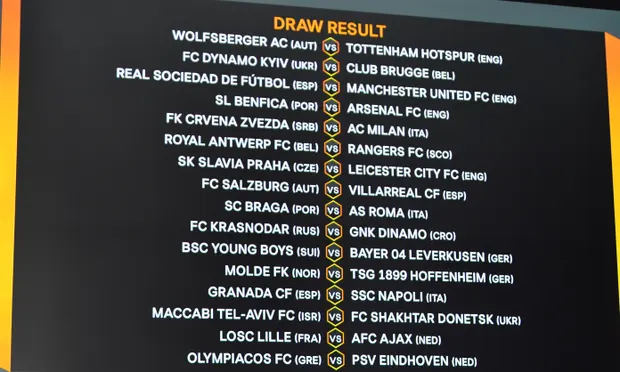