'Fernandes would fit in at Real Madrid, Barcelona or Juventus' - Man Utd star has stats of a Ballon d'Or contender, says former mentor

The man who convinced the Portuguese to start his career in Italy has not been surprised by his success at Old Trafford over the past year B... 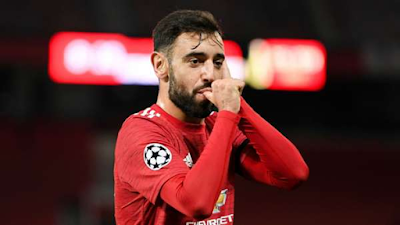 Bruno Fernandes would fit in at Real Madrid, Barcelona or Juventus, according to his former mentor Cristiano Giaretta, who says the Manchester United star's statistics for goals and assists make him a potential contender for the Ballon d'Or.

Fernandes began his professional career in Italy with Novara in 2012, where he spent one year before joining Sampdoria.

The Portugal international also took in a spell at Udinese before returning to his homeland, with Sporting CP snapping him up in the summer of 2017.

He quickly became a talismanic figure at Jose Alvalade Stadium due to his all-action style of play, while learning to supply the kind of end product that matches his mercurial talent on a consistent basis.

Fernandes soon began attracting attention from top clubs across Europe, and United eventually won the race for his signature in January.

The Red Devils forked out €55 million (£50m/$68m) to bring the 26-year-old to Old Trafford, which he has already repaid ten-fold, scoring 26 goals in his first 45 appearances across all competitions.

The former Sporting playmaker has also provided 17 assists, with his outstanding performances in the middle of the park helping to transform Ole Gunnar Solskjaer's side from also-rans into Premier League title contenders.

Watford sporting director Giaretta, who handed Fernandes his first professional contract at Novara, has heaped praise upon the Portuguese for rising to the very highest level of the game, while claiming he now has unlimited options when it comes to his future.

Asked where he feels Fernandes could end up, Giaretta told Calcio Mercato: “Good question. It almost goes without saying that he would be fine with Real Madrid, Barcelona or Juventus.

“The truth is he could go anywhere, but in my opinion, he’s already at the top.

“Personally, I believe that Manchester United and the Premier League are the pinnacle of a career, a point of arrival, not of passage: I thought that as a player and I am still convinced of it, as a sporting director who aims to bring Watford back to the top as soon as possible.

“Then he will make his choices, he is an intelligent boy and will know what is best for him."

The ex-Novara chief added on his relationship with Fernandes and the United midfielder being destined to become a frontrunner in the race for football's top individual prize: "I hear from him often, even a couple of times a week.

"I can say that he is the same guy I met at Boavista, with a great personality, with the same desire to work to become the best: he is one who is never satisfied, who aspires to a lot, even in his humility.

“He will never say it, but someone with his stats can dream of important goals such as the Ballon d’Or.

“Since joining Manchester United, he has made 44 appearances and scored 26 goals, without mentioning the assists and he plays for his team-mates. He has always been decisive."

Giaretta also expressed his belief that Fernandes is now the main leader in the Red Devils starting line-up, with current club captain Harry Maguire among those considered to be playing a less vital role in the team's recent success.

"It is undeniable that Bruno Fernandes is the real captain of the team,” he said. “If others are important, he is essential. If I have to tell the truth it didn’t even surprise me too much from this point of view: at 18 he was already an adult in his head. The hard work did the rest.”