Manchester United are third in the Premier League table with a game in hand They have responded brilliantly to crashing out of the Champio... 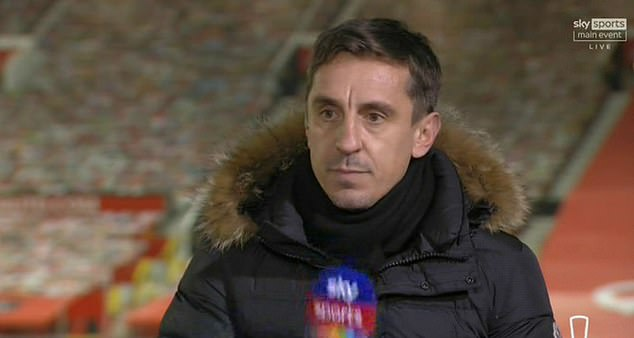 Neville has been impressed by Manchester United's response to crashing out of the Champions League earlier in December after a crushing 3-2 defeat by RB Leipzig.

United responded with a draw against fierce rivals Manchester City before two more Premier League wins over Sheffield United and Leeds and an EFL Cup quarter-final win against Everton at Goodison Park.

United sit third in the Premier League table with a game in hand which, if they win, would take them just two points behind leaders Liverpool as things currently stand.

And Neville has urged Solskjaer to think carefully about who he might sign in January, saying: 'If the right player is there they yes, because they need to improve the team. But if its not there, I wouldn’t panic. They wont panic because they’ve been doing it a bit better in recent years. ston

‘They’re a confusing bunch because three or four weeks ago, two weeks ago eve, you were looking at this Manchester United team and thinking it’s going to be a tough old season.

'Going out of Europe, the performance in the first half against West Ham was awful. But after beating Everton, the glass looks half full.'

United have a crunch clash against second-place Leicester on Boxing Day in the early kick-off and Neville wants to see United build on their impressive recent victories.

'The squad has been used, the performance against Leeds, they’re scoring goals, the depth of the squad looks good,' Neville said, according to The Metro. 'Leicester is another big game, if they go there and win they will really be gathering confidence.

'From three weeks ago, there was a point I thought this would be a real challenge. ‘But I think right now the fans will be happy because the players have a lot of quality.

'If they can get into a rhythm and start to produce performances over 90 minutes consistently, that bunch of players… there’s some big characters and big talents in there. It’s getting better and they are stronger and they have match-winners.’