The full-back scored and set one up in RB Leipzig's famous win Man City fans have praised Angelino for his performance in helping RB L... 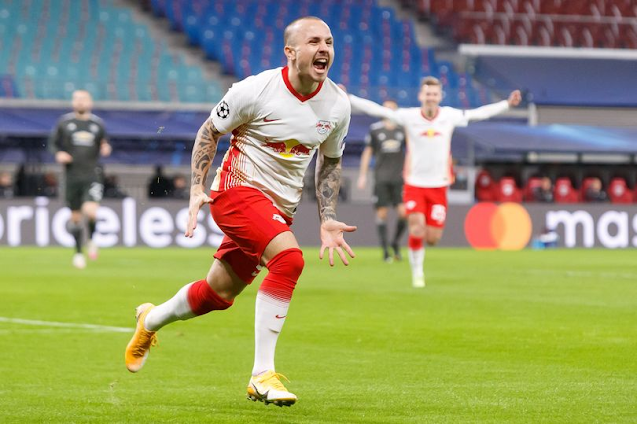 Man City fans have praised Angelino for his performance in helping RB Leipzig knock Manchester United out of the Champions League.

United went into the game knowing all they had to do was avoid defeat to secure passage to the knockout stages of the Champions League but fell 2-0 down early on.

Angelino, on loan at Leipzig from City, scored the opening goal in just the second minute, producing a fine first-time finish from Marcel Sabitzer's cross.

The 23-year-old then set-up Amadou Haidara with a cross to the far post just 10 minutes later to set the Bundesliga club well on their way to an eventual 3-2 win.

His performance led to praise from City fans, delighted at seeing one of their loanees knock their rivals out of the competition.

Speaking post-match, the Spaniard no doubt further endeared himself to City fans when he talked up the victory.

He said: "It feels so good, especially against them.

Despite his display, it does not seem likely that Angelino will be a City player much longer.

The left-back spent the second half of last season on loan at the Bundesliga club before agreeing to stay this season, with Leipzig having an obligation to buy him should he make a set amount of appearances.

Speaking last month, Angelino said that, should the loan go to plan, then it is likely the minimum-appearance clause will be met.

He said: "I really don't know for sure but a few more games need to be played.

"If everything goes normally, it will happen. In any case, I hope that I'll be on the pitch for RB Leipzig for a long time."