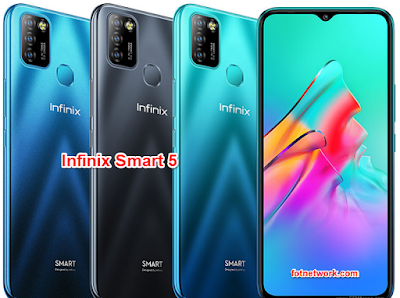 Infinix mobile, officially launched Smart 5 on August 13, 2020. It followed after the now phased out Smart 4.

Smart 5 features 2 variants with similarities in their offerings. However, the main difference between them is that the lower variant has a 3G network, while the higher one comes running on 4G.

While the smartphone comes in a dimension of 165.4 x 73.4 x 8.8 mm, it is built with Glass front, plastic back, and plastic frame. The device is powered by the Octa-core 1.8 GHz processor.

Infinix Smart 5 comes with a 6.6 inches IPS LCD capacitive touchscreen and 720 x 1600 pixels resolution. This makes it possible to have crystal clear view while on a full sunlight display. The smartphone consists of triple-camera on the rear side that features 13 MP (wide) + QVGA + QVGA while on the front there is a single 8 MP camera.

The device is fueled by a Non-removable Li-Po 5000 mAh battery + Charging 10W. The smartphone comes with sensors such as Fingerprint (rear-mounted), accelerometer, and proximity.

The phone runs on the Android 10, otherwise known as the Go edition operating system. It comes in different colors such as Black, Blue, and Green. It is pack with 2 GB and 3 GB RAM with 32 GB and 64 GB internal storage options.

Kindly check below to get the full specifications.