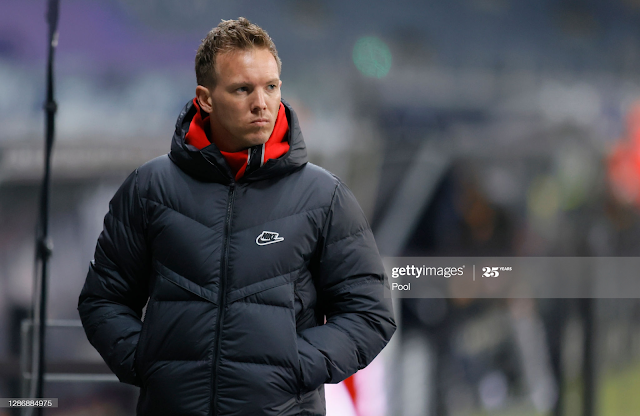 Group H is currently finely balanced heading into the final round of games next week, with Manchester United, Paris Saint Germain and RB Leipzig all sitting on 9 points each.

With PSG likely to beat İstanbul Başakşehir in their final game it means the two sides are left to play out a tense final game in Leipzig on Tuesday.

It’s a situation that both sides would have wanted to avoid, although Nagelsmann is confident that his side can come out on top.

“If we want to advance in the Champions League, we have to win,” Sport Buzzer report him saying.

“If we don’t win against Bayern Munich in the Bundesliga, we still have a few more games to go to achieve our goals.

“We wanted some kind of final against Manchester. In this face-to-face duel, we also have something to do well.”

That’s a sentiment shared by former midfielder Didi Hamann, who believes that Leipzig would have taken this situation if offered it.

“In a group with PSG and Manchester United, having a chance to go further with a win over United on the final match-day is something RB would have signed up for a few months ago,” he wrote in his column for Sky Germany.

“They can be proud of that alone. United is a moody diva with many strengths but also weaknesses. I believe in RB.”

Whether that is actually the case is up for debate, though. While this group is undoubtedly one of the hardest, RB Leipzig would have fancied their chances.

Neither PSG nor Manchester United are consistently at their best at present, and they have failed to take advantage of that.

They could quite have easily been clear in this group by this stage, rather than facing a do or die final game here, something we’re sure Nagelsmann is more than aware of and is trying to deflect from with comments such as these.