Kylian Mbappe is keen on Liverpool but is also believed to have told friends of his admiration for Premier League rivals Manchester United...

Kylian Mbappe is reportedly 'interested' in a transfer to Liverpool. But the PSG star is also believed to have told friends he is keen on their Premier League rivals Manchester United.

Speculation is rife that Mbappe could move in next summer's transfer window, with his current contract at Paris-Saint Germain set to end in 2022.

Liverpool are serious contenders to land the 21-year-old due to their pedigree in recent campaigns - with Jurgen Klopp having led them to Premier League, Champions League and Club World Cup success since 2019.

Real Madrid have been regarded as favourites to sign the World Cup winner, who scored twice in PSG's 5-1 win over Istanbul Basaksehir this week to take his tally to 12 for the season.

But it has emerged that Ole Gunnar Solskjaer's United could also join the race for Mbappe, with the forward believed to be an admirer of the club.

That's according to journalist Duncan Castles, who discussed the France star's future on The Transfer Window podcast.

"The clubs he is particularly interested in moving to, Real Madrid, Barcelona, who both have financial issues, Liverpool, and also he’s told friends that he likes Manchester United," he said.

"Liverpool, we know how their finances are at present. We know the efforts FSG have made to improve their finances by laying off and using government schemes, we know that there’s a battle going on at the moment between Klopp and FSG about recruiting a new centre-back.”

Mbappe praised Liverpool earlier this year, describing the Reds as a winning "machine", while Klopp is a known fan of the forward.

Whether a move will be sanctioned will depend very much on finances, with Mbappe expected to cost at least £150million, while Le Parisien reports that his wages are around £315,000 a week.

Such a paypacket would break the salary structure at Liverpool, where top earners such as Mohamed Salah and Thiago Alcantara are said to be on around £200,000 per week.

The funds involved would also pose a problem for United, with executive vice-chairman Ed Woodward having baulked at Borussia Dortmund's £108m valuation of Jadon Sancho during the summer.

Earlier this year, Mbappe said of Liverpool: “This season, Liverpool have been a machine in the Premier League.

“They have made winning look easy but the truth is that it is never easy.

“To be as ruthless as they have been would come from lots of hard work in training and from having a very good manager.” 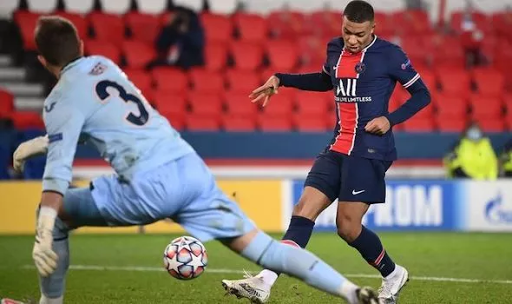