Manchester United have named their team for this evening’s game with Manchester City at Old Trafford. Ole Gunnar Solskjaer will be hoping ... 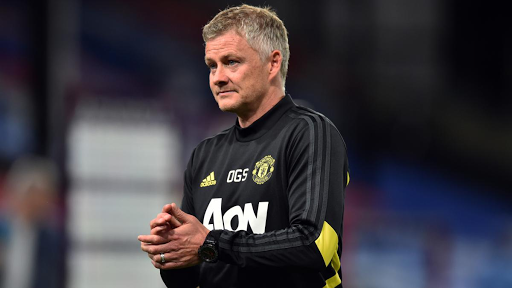 Manchester United have named their team for this evening’s game with Manchester City at Old Trafford.

Ole Gunnar Solskjaer will be hoping for a positive reaction after another setback this season following the club’s elimination from the Champions League in midweek.

“Anthony will definitely be involved and Edinson has been on the grass today, but I’m not sure if he’ll make it,” he told ManUtd.com. “Apart from that, we’ve had a couple of days of recovery and we should be ready.”

“Of course [it’s been difficult. It’s very disappointing to be out of the Champions League, but that’s the reality now, and you’ve just got to pick yourself up. We’ve got a massive game to look forward to and many, many games coming up. We are ready to go again… You have to get the mindset sorted straightaway. You can’t dwell too long on it, there is nothing you can do but, of course, it’s a natural reaction to be disappointed. There’s also a reaction needed or that will come. It’s so natural when you’ve had that disappointment that you don’t want to have that feeling again.”

“Of course, they were quiet on the way back, we didn’t land home until very early in the morning, then they had a recovery day. But, since then, they’ve picked themselves up and we know that we have to focus.”

“It’s a Manchester derby. Last time we had fans here, we had City visiting. It’s too bad they can’t be with us now, but we’ll do whatever we can to get the same emotion and same feeling. We miss the fans in general. Of course, those games are the games that live in the memory of many and the players as well. We can recreate the performance because we are in good form. The boys have taken strides. Of course, you have setbacks along the way, but that’s football.”