Manchester City manager Pep Guardiola has to prepare his team for Premier League games as well as another Champions League match   Pep Guard... 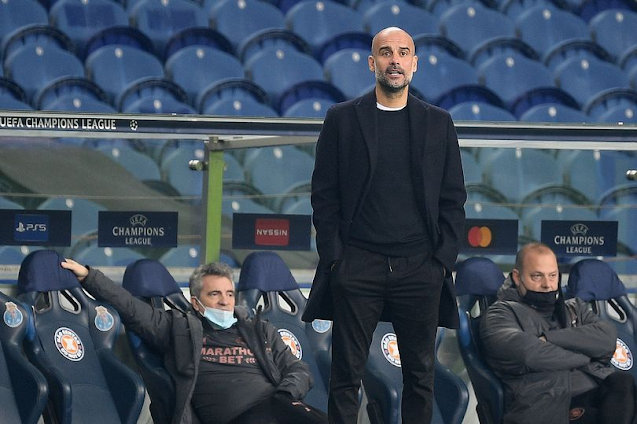 The Blues confirmed top spot in the group with a drab 0-0 draw at Porto, ensuring an easier draw on paper in the last-16 of the knockout competition next year.

That leaves them with nothing riding on their home clash with Marseille next week, which comes a few days before the first Manchester derby of the season. City's coach admits his team need to focus on the Premier League for the next few months, where they have already dropped a number of points.

However, while there could be many changes - there were seven made on Tuesday from the weekend win over Burnley - Guardiola will not accept his players ignoring Marseille and focusing completely on United as he tries to drive up standards within the squad.

"It depends if they're tired, it depends on their behaviour on the pitch, in training sessions, in the locker room, in many situations. We will see," he said.

"We were happy to qualify two games early. It was so important. Of course we travelled to Portugal to secure the first position. We know that the only result it couldn't happen was 2-0. It didn't happen, we drew, we played to win and this was the most important thing.

"Of course now it is important but it is not just to prepare absolutely for United and Old Trafford, because against Marseille we're going to play to win. This is the way big teams create the mentality. It doesn't matter what competition you play, you have to try to do it and we did really well all game."

Pressed on if Marseille would be an opportunity taken to use some of the academy players, he responded: "I cannot answer this question. I am sorry. Now is the time to have dinner, rest, tomorrow travel and prepare for Fulham.

"We will see. I have 20, 21 players and of course they are available. If they can play, they are going to play but maybe some players get rest and no selection and the young academy is going to the bench. I don't know, right now I cannot answer this question."