MANCHESTER-Manchester United climbed two places up to second in the Premier League after Marcus Rashford scored deep into stoppage time to... 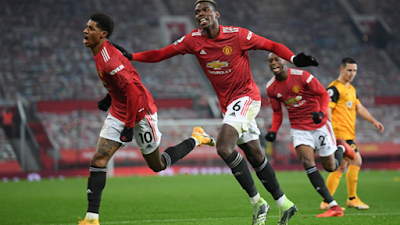 MANCHESTER-Manchester United climbed two places up to second in the Premier League after Marcus Rashford scored deep into stoppage time to give them a fortuitous 1-0 home win over Wolverhampton Wanderers on Tuesday.

The result left United on 30 points from 15 games, two behind champions and leaders Liverpool who visit Newcastle United on Wednesday, while Wolves stayed 12th on 21 points. Rashford gave United the win when it seemed the game was heading for a goalless stalemate, with his left-footed shot taking a deflection off Romain Saiss and beating goalkeeper Rui Patricio at the near post.

Rashford acknowledged United ground out the win after a laboured performance although manager Ole Gunnar Solskjaer deployed an adventurous formation with three forwards behind striker Edinson Cavani. The visitors missed several chances in the first half as they stifled United with crisp one-touch passing but the best opportunity fell to the home side when Patricio kept out a Fernandes sitter in the 34th minute. At the other end, United keeper David De Gea parried shots by Ruben Neves and Pedro Neto while Saiss headed a Joao Moutinho free kick onto the top of the crossbar. 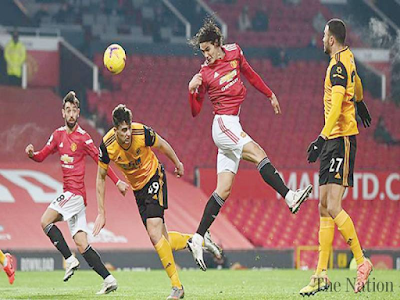 Patricio also clawed out a vicious long-range effort by Paul Pogba in the 75th minute and Wolves seemed to have done enough to earn a point after soaking up United pressure in the closing stages. But they were undone from a seemingly innocuous move as Rashford picked up a long Fernandes pass on the right, cut inside and with little support in the penalty area, he hit a hopeful shot which wrong-footed Patricio.

Wolves manager Nuno Espirito Santo rued his team’s lapse of concentration in the dying minutes but added they needed to put the disappointment behind them quickly amid a busy festive schedule. “This is football and a learning process,” the Portuguese told Amazon Prime.