Manchester United are set to compete in the first Manchester Derby of the season on Saturday when they host arch-rivals Manchester City at... 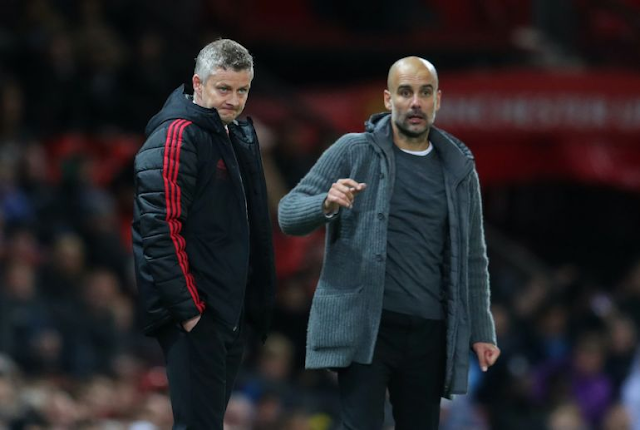 Manchester United are set to compete in the first Manchester Derby of the season on Saturday when they host arch-rivals Manchester City at Old Trafford.

Coming into the game, United actually sit higher than City in the Premier League table currently on 19-points from their first 10-games. City, on the other hand, sit once place lower in seventh on 18-points after the same amount of matches.

Ole Gunnar Solskjaer will be looking to reignite his side’s form after a recent crushing 3-2 defeat to RB Leipzig in the Champions League on Tuesday night sent the Reds crashing out at the group stage.

Domestically though, Solskjaer’s side is in fine form having won four of their last four matches, including executing two superb comebacks against Southampton and most recently, West Ham United.

Elsewhere, United’s arch-rivals City have finally kicked their campaign off after a patchy start saw them suffer a shocking 5-2 defeat to Leicester City and later draw 1-1 to newly-promoted Leeds United.

Both sides will be desperate to get one up on their neighbours, however, it is United who boast the better head-to-head record after winning three of their last four meetings, in all competitions.

Ahead of Saturday’s exciting clash, we have predicted how we think Solskjaer will line his Reds up.

Despite treading dangerously close to being dropped in-favour of Dean Henderson, I can’t imagine Solskjaer will choose the Manchester Derby as the game to do it.

I fully expect De Gea to start in between the sticks on Saturday.

Endured a poor game against RB Leipzig earlier this week but with such limited choices available at right-back, I expect Wan-Bissaka to turn out again on Saturday.

The usual centre-back pairing of Lindelof and Maguire is the most likely partnership to be tasked with keeping the likes of Gabriel Jesus quiet on the weekend, in my opinion.

As above. I can’t imagine Solskjaer will chop and change his standard, go-to back-four for the Manchester Derby. I fully expect Maguire to wear the armband as usual on Saturday.

I expect new-signing Alex Telles to be dropped in-favour of regular left-back Shaw.

Telles has not enjoyed a good start to his United career, in my opinion and as such, I expect Solskjaer to award Shaw with his second start of the week.

United’s toughest position to predict, but after being subbed off with a large portion of the game to go against RB Leipzig, I wouldn’t be surprised to see Solskjaer opt to go with the experienced Matic at the hub of United’s midfield.

Missed the RB Leipzig game through suspension and did not feature against West Ham last weekend, I expect the fully-rested and industrious Brazilian to come back into the Reds’ starting line-up on Saturday.

United’s number-18 has the ability to change a game on a moment’s notice.

Assuming no late injury, Fernandes will start against City on the weekend.

Coming back into decent form, I expect Rashford to line-up on the right-hand side when United face City.

Enduring arguably his worst patch of form to date, however, with Solskjaer likely to change his system from the one he deployed against RB Leipzig, I wouldn’t be surprised to see the Norwegian switch back to his trusted 4-3-3, in which case, fans should expect to see Martial start on the left.

Straight down the middle. Give the kid a chance and he’ll do the rest.