THE GRIM REAPER is standing over Manchester United as the Group of Death goes to it’s final round of games. It was labelled as such when t... 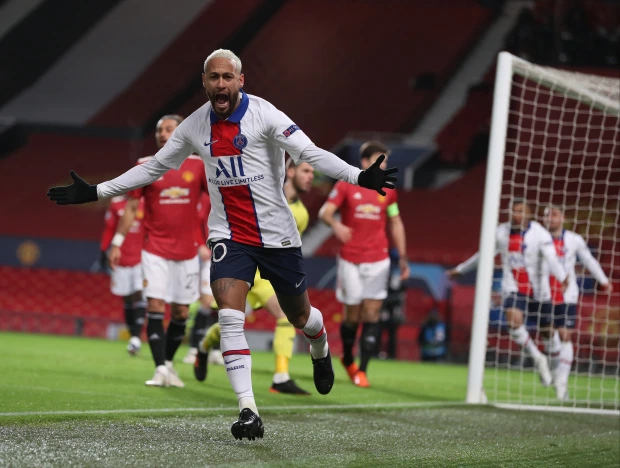 THE GRIM REAPER is standing over Manchester United as the Group of Death goes to it’s final round of games.

It was labelled as such when the Red Devils got drawn against last season’s Champions League runners-up, the Turkish title holders and the current Bundesliga title contenders.

It is the latter, RB Leipzig who they must get a point off now, away in Germany to go through.

The fact they have beaten them 5-0 here at Old Trafford earlier in the group will mean nothing with nerves jangling and reputations on the line.

It should never have been like this having beaten both them and PSG to be in a strong position to qualify.

The prospect of the Europa League, particularly for those who ended up in Kazakhstan last season will literally send shivers down the spine.

But United blew this particularly after Martial missed a second-half sitter and when Ole Gunnar Solskjaer failed to sub Fred at half-time when it was clear he was heading for a red card.

PSG lead after six minutes through Neymar, Rashford’s deflected shot drew things level on 32 but the visitors landed the winner on 69.

A minute later Fred was sent off, having somehow escaping a red card in the first half for nutting an opponent, and the game was up with Neymar adding a third in injury time.

It had been a cracking first-half full of action and incident.

When did Scott McTominay ever dream he would have Neymar rattled?

Or indeed Fred believe he would ever be caught nutting someone only to just get booked?

That incident came in the 21st minute and Italian referee Daniele Orsato will be able to explain what a ‘booking nut’ is compared to a ‘red card nut’.

The United players were claiming Bruno Fernandes had been elbowed by the touchline when in the middle of the pitch Leandro stormed towards Fred to give him some verbals.

Fred was having non of it and leant his forehead into his opponents with a forward movement.

As ever in these situations the reaction was theatrical but it’s a red card.

The ref checked it on the TV screen by the side of the pitch, after searching for it, and decided it wasn’t enough of a nut.

That let off seemed to give United a lift having been dominated up to then with PSG taking the lead after just six minutes.

Kylian Mbappe charged down the right, cut inside and exchanged passes with Neymar before having a shot.

The ball deflected off Victor Lindelof and Neymar was onto it volleying home at an angle from close range.

United’s equaliser had some good fortune about it with his shot from just inside the area covered by goalkeeper Keylor Navas untul Danilo’s deflection beat him.

There was a sense of injustice running through the PSG ranks and Paredes took retribution on Fred when he slid in and left his foot there to catch him.

Again it was deemed a yellow, this time the ref was right.

Then McTominay started to get under Neymar’s skin.

After executing a superb tackle on him on halfway both players ended up on the floor as McTominay got up he stepped backwards and onto Neymar’s ankle.

Only he knows if he meant it.

He then fouled him twice more in a minute and the irate Brazilian followed him off the pitcvh at the break berating him. He would have his revenge.

But United had the momentum going into the second-half and should have lead four minutes after the break but somehow Anthony Martial managed to find the Stretford End rather than an open goal.