Manchester United boss Ole Gunnar Solskjaer has made a decision on Paul Pogba ahead of Saturday's derby against Manchester City. Pogba's future is uncertain after the midfielder's agent Mino Raiola said in an explosive interview this week that his client wanted to leave Old Trafford

Raiola's comments came on the eve of United's make-or-break Champions League clash against RB Leipzig - which Solskjaer's side subsequently lost 3-2.

Pogba came off the bench to aid United's fightback from 3-0 down in Germany, where two late goals proved insufficient to prevent them dropping into the Europa League.

The midfielder's future is expected to be the subject of much speculation ahead of the January transfer window, with the 27-year-old having been linked with the likes of Real Madrid, Juventus and PSG.

But Solskjaer has insisted Pogba is still in his plans, and described him as 'focused' ahead of Saturday's Premier League visit of Pep Guardiola's City.

“I said during the week that this is a team game and Paul is part of this team," said Solskjaer as he addressed the media ahead of the Old Trafford encounter.

"He's very focused on contributing when he's here. He's got the hunger and appetite to play and wants to play.

Pogba came on for the final half-hour against Leipzig, and his header resulted in United's second - although it was credited as an own goal.

He also made a positive contribution in the win over West Ham last weekend, equalising for the Red Devils after being handed a rare start by Solskjaer.

The manager said: “He's just focused on performing when he gets a chance. That's the good thing about Paul.

"He's got the quality and the desire to do well when he comes on, like he did against Leipzig. He had a positive impact. He's part of the squad for tomorrow.”

United host City at Old Trafford at 5.30pm on Saturday. Solskjaer's side go into the game seventh in the Premier League - one point and one place ahead of their neghbours, with both Manchester rivals having at least one game in hand on the teams above them 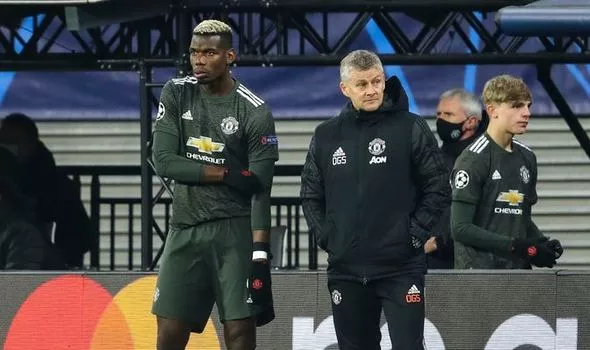