The Norwegian head coach is confident that his fellow countryman will go onto achieve great things on Europe's biggest stage. Manchest... 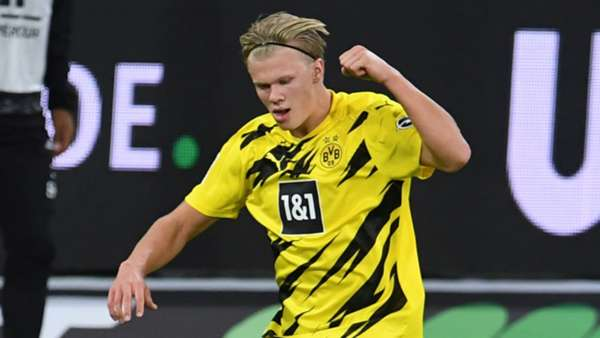 The Norwegian head coach is confident that his fellow countryman will go onto achieve great things on Europe's biggest stage.

Solskjaer is currently the highest-scoring Norwegian player in the history of Europe's elite competition, having scored 20 goals during his illustrious playing career at Old Trafford between 1996 and 2007.

Former Aston Villa and Valencia striker John Carew is next on the list with 18 to his name, while Haaland is just two goals further back after netting a combined total of 16 in the Champions League across his spells at Red Bull Salzburg and Dortmund.

The talented young frontman is almost certain to beat Solskjaer's mark given he only recently turned 20 years of age, and he may even reach the milestone this season, having already scored six in four group-stage appearances.

Haaland scored a brace in Dortmund's 3-0 home win over Club Brugge on matchday four, and will likely feature in Lucien Favre's starting XI when Lazio arrive at Westfalenstadion on Wednesday.

Solskjaer saw the ex-Salzburg star's abilities up close while he was in charge at Molde, and feels partly responsible for turning him into the prolific frontman that he is today.

Asked if Haaland will go onto break his European record, the United head coach told a press conference ahead of his team's clash with Paris Saint-Germain in midweek: "He’ll beat it and very quickly, that’s for sure.

"The boy has had a great start to his career.

"It was really good to work with him, to see the potential in him, and some part of me feels proud of having a little bit of an input in such a rise.

"I’m sure Erling will score loads in the Champions League."

Solskjaer reportedly tried to lure Haaland to Old Trafford before his €20 million (£18/$24m) switch to Dortmund in January, and United continue to be credited with an interest in his services along with the likes of Real Madrid and Barcelona.

Speculation surrounding the Red Devils' possible moves in the market will only increase heading into the winter window, but the man currently occupying the dugout insists he is not yet thinking about any possible changes to his squad.

Quizzed on the possibility of any incomings in the new year, Solskjaer told reporters: "Here we go... on the eve of an important game against PSG and we’re talking transfers.

“With our additions in the summer and last time in January, I don’t think it’s right for me to start commenting on the transfer window already.

“Let’s see where we are in January. I’ve got selection issues already!”