Manchester United avoided a lengthy round trip to the far flung corners of Europe – Ukraine, Russia or Israel – in the last 32 of this sea... 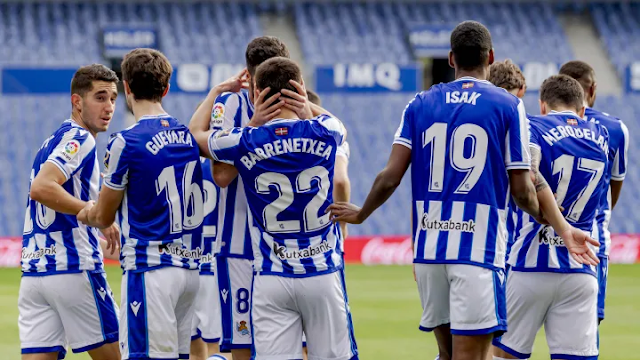 Manchester United avoided a lengthy round trip to the far flung corners of Europe – Ukraine, Russia or Israel – in the last 32 of this season’s Europa League, but in doing so ended up with arguably the best team among the unseeded clubs available to them in the draw.

United will face Real Sociedad over two legs in February. It is impossible to say how La Real will be getting on by then. But, right now at least, they are La Liga leaders. That automatically makes them a very dangerous opposition to be facing so relatively early in the competition.

United have faced the club from the picturesque Basque city of San Sebastian in Europe before, meeting home and away in the 2013/14 Champions League group stage. On those occasions, United were still reigning English champions and La Real were in Europe for the first time in a decade.

An early own goal helped United win 1-0 at Old Trafford, before a 0-0 draw at Anoeta. United went through to the next round, but the Spaniards finished bottom after picking up no other points. In their team back then was a young Antoine Griezmann in his final season with the club.

Former Liverpool striker John Toshack has had three spells in charge of La Real in the past, while Chris Coleman and, famously, David Moyes have been high profile foreign appointments. These days, it is club legend Imanol making the calls. The 49-year-old spent most of his playing career at Anoeta, before coaching at youth and B team levels since 2011 until he got the top job in 2018.

What they are is difficult to beat. They have lost just once in 13 La Liga games so far this season and were only beaten, narrowly, by group winners Napoli in the Europa League. That sole domestic defeat came back in September and La Real surged to the top of La Liga thereafter thanks to a run of six consecutive wins during which they only conceded twice.

Scoring goals against them could be a problem for United. La Real have only conceded six times in La Liga, a record comparable with Atletico Madrid, whose reputation for strong defence is known and revered across Europe. Real Madrid, by comparison, have conceded twice as many.

What cost the team better results in the Europa League – they only took nine points from six games – was a surprising lack of goals, finding the net just five times. That is actually in stark contrast to their form in front of goal back home, where they lead La Liga with 23 goals.

Ex-Manchester City star David Silva is enjoying a fresh challenge back in Spain at the age of 34. Tellingly, his recent injury absence coincided with a downturn in results and the team hasn’t won in La Liga since he last started, which has allowed Atletico Madrid to catch up in the standings.

Aside from Silva pulling the creative strings, forwards Willian Jose, Jon Bautista and Alexander Isak all pose threats up front, as does attacking midfielder Roberto Lopez. But the majority of La Real’s goals this season have come from their wingers.

Mikel Oyarzabal in particular is the danger man and was wanted by Manchester City over the summer to replace Leroy Sane. Portu, something of a late bloomer at 28, typically plays on the opposite right flank and between them they have 17 goal contributions.

Among familiar faces, former United talent Adnan Januzaj has somewhat resurrected his career at Anoeta, making the switch in 2017. Now 25, he isn’t a regular starter by any means, but remains a regular part of Belgium squads, which is no mean feat considering the quality they possess.

Midfielder Mikel Merino briefly played Premier League football for Newcastle, while veteran defender Nacho Monreal traded Arsenal for La Real in 2019. Meanwhile, Asier Illarramendi is a club legend who once commanded a transfer fee in excess of €30m to join Real Madrid. He has been back since 2015 and is captain, but he hasn’t played in over a year because of long-term injury problems.