Manchester United have been encouraged to do their shopping at Ajax. Ajax chief Edwin van der Sar wants Man Utd to be interested in his si...

Manchester United have been encouraged to do their shopping at Ajax.

Ajax chief executive Edwin van der Sar says he wants Manchester United to take a look at their current crop of players because it gives him "honour" that he is helping to propel stars to the next level.

Van der Sar spent six years as Sir Alex Ferguson's No 1 goalkeeper after making the move from Fulham in 2005.

The Dutchman became one of the best shot stoppers in the Premier League but he has now moved in to the other side of the game.The 50-year-old has returned to his first professional club in a boardroom capacity and he is charged with a range of tasks from co-ordinating jersey sales to finding new clubs for his players.

And unlike some of Europe's biggest clubs, Ajax are not afraid of their youngsters attracting attention.“It sounds strange but we are almost honoured if Real Madrid, Barcelona and Manchester United are coming for our players," Van der Sar said.

"Of course, I’d rather keep them but, having been a player myself, if you give us great service, league titles and commitment, then we think with you and set you along for the next part of your career.

"But we hope that you come back to Ajax and play for another one or two years, come onto our coaching staff or be like myself and Marc.”

The ex-Red Devils keeper also helped to broker a deal to take Hakim Ziyech to Chelsea for £36million.

“We know the ambition of the players and if our players are not good enough to be scouted by the top clubs, then we are doing something wrong,” he added.

Van der Sar also explains how his current role is similar to in his playing days.

“I step in when it is needed,” he says. “When there’s a through-ball between Nemanja Vidic and Rio Ferdinand (he claps his hands) then I go out and get it. It’s similar now.

"If they are stuck with a problem that they can’t solve or I see things are going wrong I ask: ‘What are you doing? Why are you doing this? Can I help you?’

“That way, I try to be the sweeper-keeper that I was as a player, now as a chief executive.

“Maybe I exaggerate a little. Because it’s not that simple — it’s a proper job being a chief executive.” 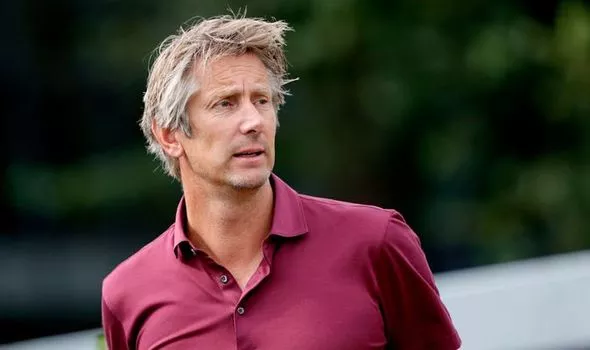