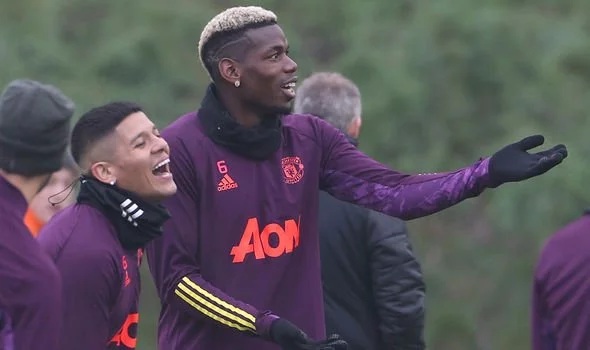 Manchester United are ‘fed up’ after Mino Raiola’s comments on Paul Pogba, it has been claimed. The Red Devils midfielder’s desire to leave Old Trafford was confirmed by his agent on Monday night. And, ahead of their Champions League showdown with RB Leipzig, Ole Gunnar Solskjaer’s side are far from happy.

Raiola revealed to Tuttosport on Monday that Pogba wanted to leave United, having grown unhappy with his current role.

“There’s no point beating about the bush. It’s better to speak out clearly, look forward and avoid wasting time to find culprits,” he said.

“Paul is unhappy at Manchester United, he can’t manage to express himself like he wants to and like people expect him to.

“He needs to change team, he needs a change of scenery.

“He has a contract that will expire in a year and a half, in the summer of 2022, but the best solution for all parties is a transfer in the next window.

“Otherwise the Old Trafford club, which I have a great relationship with, knows well that they would risk losing him on a free transfer, given that at the moment it’s not the player’s intention to extend the contract.”

And Sky Sports reporter James Cooper has claimed United are ‘fed up’ with Raiola and Pogba in the aftermath of the agent’s words.

“Officially they won’t say a word simply because they’ve got perhaps the biggest match of their season tonight.

“And low and behold they’ve got Mino Raiola coming out doing an interview Italy saying his time as Manchester United is over.

“United, as an organisation, are sick and tired of this.”

Pogba left United back in 2012 but returned from Juventus four years later having been won round by Jose Mourinho.

But, in the time since, the 27-year-old has pushed to leave on two occasions.

Pogba sought a move to Barcelona shortly after winning the World Cup two years ago but wasn’t granted his wish, with Mourinho choosing to keep him at the time.

And United refused to let him go in 2019, when he was eager to move to La Liga titans Real Madrid.

Meanwhile, Sky Sports pundit Paul Merson has ripped into Poga and Raiola - saying the France international should play snooker if he can’t be a team player.

He said: "Raiola says the style of football doesn't suit him.

“He's playing in a football team. He's not a snooker player. He plays with 10 other players. You join a team.

"It's not like Man Utd are the most defensive team you've ever seen. Look at Tottenham!

“I don't hear Harry Kane and Son moaning. Go and play snooker if you want it to be all about you.

"He knew the statement was going out. It's his agent.

“He might play dumb, he might turn around say he didn't know, but of course he knows. He'll also know there's a club interested in him. Raiola would have spoken to a club that is interested in Paul Pogba.

"They're not going to mug themselves off by saying: 'Paul wants to leave' and then nobody comes in for him. Everything is already sorted on Pogba's side of it!

"An agent doesn't come out and say a player wants to leave without interest there. Pogba knows full well what his agent is doing: Raiola has a club for him. You keep on hearing about Ronaldo coming back to Man Utd - that could be a shout - Pogba for Ronaldo?"