Manchester United were beaten 3-1 by Paris Saint-Germain in the Champions League at Old Trafford on Wednesday night. Scott McTominay has she... 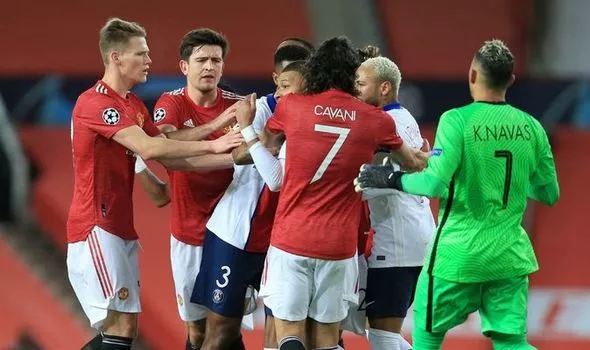 Manchester United were beaten 3-1 by Paris Saint-Germain in the Champions League at Old Trafford on Wednesday night.

Scott McTominay has shed light on the mood in the Manchester United dressing room after their bitterly disappointing 3-1 defeat at the hands of qualification rivals PSG. Last season's runners up avenged the 2-1 defeat at the Parc des Princes on matchday one, courtesy of goals from Brazilian duo Neymar (2) and Marquinhos.

It was a fiery encounter from minute one that threatened to boil over as United finished the game with 10 men after Fred received his marching orders.

In truth, the midfielder was lucky to stay on the field for as long as he did, after he appeared to push his head in the direction of Leandro Paredes in the first half.

Yet despite a VAR review, referee Daniele Orsato decided Fred's actions were only worthy of a yellow card.

The former Shakhtar Donetsk man escaped a second booking after leaving a foot in on his opponent Paredes, who was keen to make a meal of it.

PSG are often associated with gamesmanship and after regaining the lead, they began to run down the clock and slow the game down.

McTominay was also involved in a heated altercation with Neymar, following a full-blooded tackle on the world's most expensive player.

It has now emerged that PSG's on-field antics created bad feeling in the home dressing room at Old Trafford after the game and according to McTominay, the United players felt hard done by that the officials fell for it on more than one occasion.

“Yeah. Tough one, you know. With the way they act on the pitch, the way they conduct themselves,” the Scotland international told Esporte Interativo.

“Sometimes I feel like it’s difficult to accept the way… obviously in terms of how the game panned out with the referee and the decisions that were made. I have nothing to comment on that. I think it’s poor.

"I feel like the way we were feeling in the dressing room now is not good for a reason, and that’s out of our control with things that happen on the pitch."

The result halts United's momentum and ends their run of five successive wins in the wake of the 1-0 defeat to Arsenal.

McTominay and his team-mates will now try to channel their frustration ahead of the trip to West Ham on Saturday evening.

“But as I said, difficult game, we were the better team in my opinion, so for us we have to look to Saturday," McTominay added.

"We have to bounce back, we have to keep that positive momentum, I thought we were the better the team, throughout the whole game we created some brilliant chances.

"In football you have to take them, if not, you get punished.”

United must avoid defeat against RB Leipzig in Germany next week to book their place in the last 16.