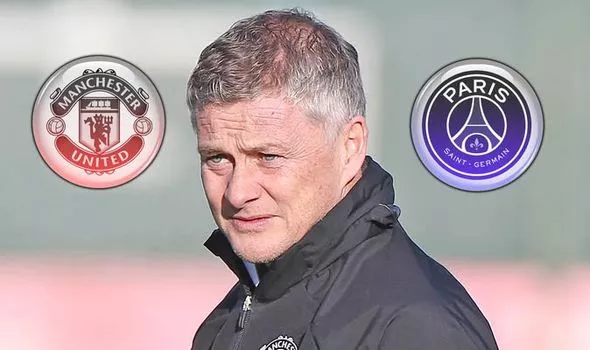 Manchester United training pictures suggest Anthony Martial and Alex Telles could be in line to start the club’s Champions League clash with PSG on Wednesday night. The duo were both seen being put through their paces ahead of the match at Old Trafford. Ole Gunnar Solskjaer’s side are looking to seal qualification for the knockout stages of the competition as they go in search of their first trophy since 2017.

United beat Southampton on Sunday, with Martial missing the game through illness.

Edinson Cavani flourished in place of the France international after entering the fray at St Mary’s, with the Uruguay international’s brace giving his side all three points.

Solskjaer confirmed in the aftermath of that contest that Telles had picked up a knock and, in his pre-match press conference, was coy on who was available.

“The training group today was a big one, everyone wants to be involved and everyone has held their hands up for selection,” he said.

And pictures from that session suggest Martial and Telles will be at the Norwegian’s disposal.

Martial was seen with a big smile on his face as the France international looks to go on a scoring run, with the forward finding the net just twice this season so far.

And Telles was also in action as the Brazil international looks to build on a solid start to life at Old Trafford so far.

United lost 2-0 to PSG when they met at the Theatre of Dreams in 2019, with goals from Kylian Mbappe and Prisnel Kimpemebe giving the Ligue 1 giants the win.

But, since then, they’ve inflicted back to back defeats on Thomas Tuchel’s side.

United won 3-1 at the Parc des Princes last year, with a brace from Romelu Lukaku and late Marcus Rashford penalty sending them through.

And they then recorded a 2-1 victory back in October. Rashford struck the winner late on after a Martial own-goal had chalked off Bruno Fernandes’ early effort.

Solskjaer admitted United were eager to win the group in his pre-match press conference, with the 47-year-old saying: “The quicker you qualify the better.

“We want to win the group, we go out there in our style with attacking intent and defending well against a top team, of course.

“Our mindset is to win the game and win the group.”

Solskjaer also expressed a belief that United were going to enjoy a good campaign, despite a stuttering start that’s already seen them lose four times.

“You lose the chance to win or lose the title in the first eight to 10 games if you don’t keep up with the pack. But we don’t win it in those games,” he said.

“We’ve recuperated and we’re just behind the top teams at the moment, but we want to be there in April or May. Now is the time to improve and develop and if we can keep up there, then great.

“Now our focus is on the Champions League and we want to win our group.

“We can talk as much as we like and give players belief, that belief in their performances and what we do day-in, day-out, like Donny next to me has the attitude of ‘every day is important’.

“I feel my squad is ready to do better than last season. Last season we were the best of the rest so let’s see if we can move up the table.”