Manchester United signed the former Ajax midfielder in a deal worth around £35m, but has found opportunities difficult to come by in the ear... 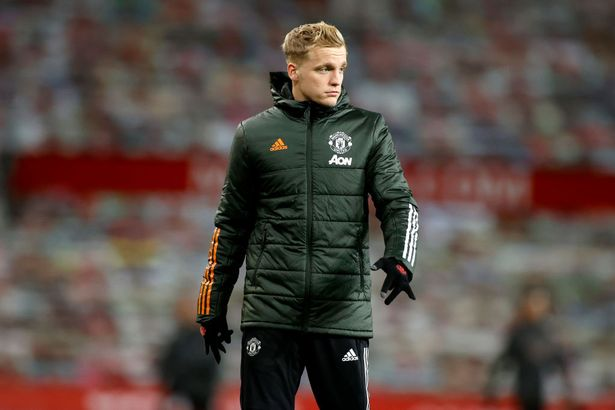 Manchester United signed the former Ajax midfielder in a deal worth around £35m, but has found opportunities difficult to come by in the early months of the season

Van de Beek was only signed by the Red Devils in the summer, splashing out around £35million on the Ajax midfielder.

However, the 23-year-old has found opportunities difficult to come by in his first season in English football.

With three months of the season gone, Van de Beek has started just a pair of Premier League games, with the majority of his chances coming from off the bench.

He was handed a rare start in the win over West Ham this month, but was withdrawn at half-time with his side 1-0 down.

Eriksen meanwhile, has endured his own struggles after swapping the Premier League for Serie A in January.

After leaving Tottenham, the Denmark international joined up with Antonio Conte at the San Siro, but has struggled in his opening 12 months in Italy.

Conte has reportedly deemed Eriksen surplus to requirements and the Italians are keen to get his heft salary off the wage bill.

With that in mind Costacurta, speaking to Italian TV, has proposed that Van de Beek could move to Inter, with Eriksen moving in the opposite direction.

"Eriksen would be someone to exchange with someone who does not play in England," he said as quoted by Calciomercato.

"With Manchester United, Arsenal. Van de Beek, for example, could be a good idea for Inter."

Ole Gunnar Solskjaer has consistently defended his use of the midfielder, suggesting he will be given a chance in due course.

That could come in the next few weeks with United facing up to a hectic festive fixture schedule, starting with the Carabao Cup quarter final against Everton on Wednesday night.