Manchester derby: Can Solskjaer survive a beating at the hands of the noisy neighbours?

Solskjaer has a knack for pulling off results when he is on the brink at United – he faces a City side with problems of their own Solskjae...

Tomorrow afternoon brings us something unusual: a Manchester derby with neither team in the top four of the Premier League.

City can push Ole Gunnar Solskjaer to the brink, but we all know what happens when the United manager is under pressure — he finds a way.

Here are five questions that will decide the derby…

Is it time for the Manchester United bounceback?

Solskjaer is the football manager who cried wolf. Just as he edges close to the point of no return, United pull off an unexpected victory to ease the pressure and provoke hope in some quarters — including the Old Trafford boardroom — that he can still take this giant club back to where they believe they belong.

This is not all on Solskjaer. Manchester United’s ownership and lack of football expertise at director level would place a handbrake on their attempted redemption whoever was the manager. But that’s a flimsy argument for keeping faith with a rookie manager who has had two years in the job and been allowed to spend £280 million on new players.

The suspicion is that the individual talent within United’s squad offers a natural floor to their achievement and Solskjaer’s tactical naivety provides the ceiling.

Can Solskjaer continue his big-game streak?

Given that alleged lack of tactical sophistication, it seems illogical that Solskjaer has recorded his best results against elite opposition. He has beaten Paris Saint-Germain twice, Manchester City twice and Chelsea four times in all competitions.

But maybe that figures. We often accuse the City manager, Pep Guardiola, of over-thinking his strategy against ‘big six’ opponents. Perhaps there is a benefit to the opposite approach: picking a team filled with individual talent and telling them to go out and play.

United’s Champions League defeat on Tuesday was engineered chiefly because Solskjaer seemed to fall into the Pep trap, altering his system and being picked off by Julian Nagelsmann.

This should not serve to undermine Solskjaer’s work in his ‘big six’ Premier League assignments. Almost all of them have come when his job has been under serious scrutiny. To provoke excellent performances in those circumstances suggests man-management credentials that should not be sniffed at. Whatever criticisms we can lay at Solskjaer’s feet, losing the dressing room is not one.

And can Guardiola rediscover his?

If Solskjaer has succeeded in United’s toughest league assignments, Guardiola’s performance in them has declined sharply. Between 2017-18 and 2018-19, City played 20 league matches against ‘big six’ opponents and their record was extraordinarily good. Guardiola’s side won 16 of the 20 and averaged 2.45 points per game. No other team managed more than 1.5 points per game.

Since then, City have slumped to fourth in the ‘big six’ table. They have played 13 such league  fixtures since the start of last season, winning five and losing six. In points-per-game terms, their 1.3 is lower than Liverpool, Tottenham and Manchester United. Away from home, that record is even worse. City’s last away league win against a ‘big six’ team was at the Emirates in December 2019. Since then, they have lost at Tottenham (twice), Manchester United and Chelsea.

Can Solskjaer fit Pogba into his derby team?

Solskjaer had stayed true to his 4-2-3-1 formation until Tuesday night’s defeat in Leipzig; their Champions League failure surely dictates that it will return this afternoon. But that presents a problem to him.

For all the noise over the agent Mino Raiola’s ill-timed outburst about his client Paul Pogba’s desire to leave, Pogba changed the game in United’s favour when he came off the bench.

Picking Pogba as one of the two central midfielders reduces his ability to create in the final third, but then play him further up the pitch alongside Bruno Fernandes and United risk being caught out on the counter attack.  That suggests Pogba is more likely to play the role of emergency super-sub.

City’s slump after winning two domestic titles has been framed through defensive vulnerability and the inability of Guardiola to motivate players to stay true to his tactical ideals, but it’s amazing what a difference taking your chances makes.

In 2017-18, City led the division for their conversion of shots into goals — 20.7 per cent. In 2018-19, as they defended their league title, that conversion only dropped to 19.4 per cent. But so far this season, they rank 13th in the Premier League at 14.2 per cent. The absence of Sergio Aguero doesn’t help, but during his previous injury lay-offs other City players have stepped into the breach. That is no longer happening.

In three fixtures against Tottenham, Leicester and Leeds, City took a total of one point and endured a combined scoreline of 3-8. They also had 61 shots in those three matches and allowed their opponents just 23. Aguero missed all three games. He may be back for the derby and it might make all the difference. 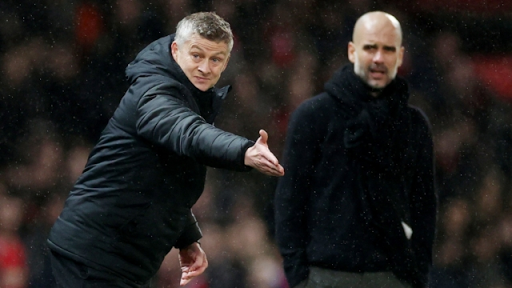