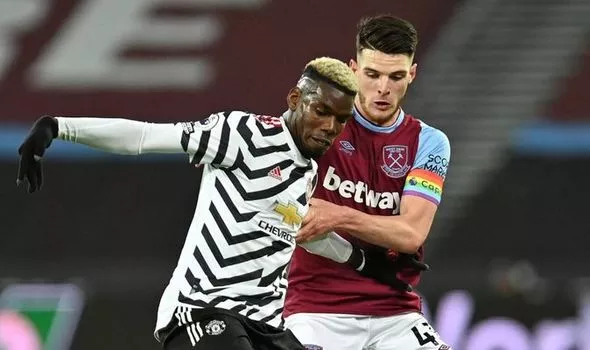 Manchester United are looking at Declan Rice, according to reports.

Manchester United are reportedly plotting a move to sign Chelsea transfer target Declan Rice as a potential long-term replacement for Paul Pogba after the Frenchman’s agent talked up the chances of a move next summer.

Pogba is about to enter the final 18 months of his contract.

The French midfielder was originally set to leave in the summer of 2021, but United triggered the one-year contract extension clause to keep him until 2022.

There were reports he was engaged in negotiations over an extension earlier this summer after enjoying a good spell of form for United.

But now, it seems he is on his way out of the club, after his agent Mino Raiola spoke openly about his desire to manufacture a move.

"Paul is unhappy at Manchester United, he can’t manage to express himself like he wants to and like people expect him to.

"He needs to change team, he needs a change of scenery."

That led to speculation that he could be sold when the January transfer window opens, though Raiola corrected himself at the Golden Boy Awards and confirmed it will be tough to find him a move in the winter window.

That gives United more time to prepare for his departure and start looking for a potential replacement, with reports suggesting Ole Gunnar Solskjaer has a target in mind.

The Manchester Evening News claims Solskjaer has identified West Ham captain Rice as an ideal player for his system.

Rice was wanted by Chelsea during the summer transfer window, but the Blues balked at the £73million asking price.

Instead, they decided to wait until the end of the season, and are reportedly unlikely to go after him in January.

It is now possible that the two Premier League giants could be involved in a bidding war over the midfielder next summer, with the player himself said to be unwilling to push for a move.

Rice, club captain at West Ham, is under contract until 2024 with a club option for a further year, meaning the Hammers are under no obligation to sell any time soon.

He said: “Declan Rice was superb. He absolutely ran the show

“He was up against Kalvin Phillips as well, who is a good player.

“I thought he just took the game by the scruff of the neck.

“He just stunk of a Manchester United signing to me. I was sat there thinking, ‘Wow!’”