The Uruguayan forward opened the scoring at Goodison Park on Wednesday night and supporters are all discussing what Bailly did afterwards.... 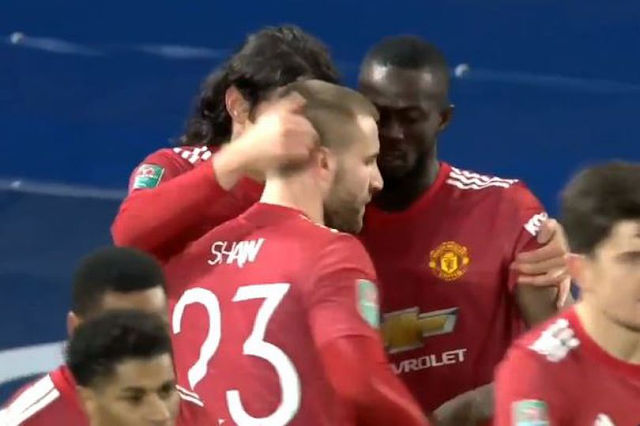 The Uruguayan forward opened the scoring at Goodison Park on Wednesday night and supporters are all discussing what Bailly did afterwards.

Ole Gunnar Solskjaer's side took the lead in their Carabao Cup quarter-final on Wednesday night through Cavani, with Anthony Martial adding a second late on.

The Uruguayan found the net with a fantastic left-foot strike into the bottom corner, and Bailly's reaction in the aftermath has got United fans talking.

The defender made his first start since October after injury, replacing Victor Lindelof alongside Harry Maguire in the heart of defence.

Bailly was captured asking Cavani to perform his trademark arrow celebration as the players celebrated the first goal.

It became a trademark for the former Paris Saint-Germain forward, which has also been seen as a 'sniper'.

Bailly's odd request has got fans talking on Twitter, with supporters in stitches with Bailly.

United will now face Manchester City in a one-legged semi-final for a place at Wembley.

The EFL announced at the start of the season that the semi-finals will switch from two legs to one this year due to fixture congestion caused by the coronavirus pandemic.

The semi-finals will feature one crucial difference from earlier rounds, with extra-time being reintroduced to the competition.

Extra-time was scrapped ahead of the 2018/19 season in order to help reduce fatigue for players, with drawn ties instead going straight to a penalty shootout.

With the absence of a second leg, the EFL opted to allow extra-time for the semi-final along with the final.

The semi-final and final will also feature VAR, which was not available in previous rounds of the competition.